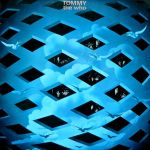 We Think It’s This One

I don’t know of another Who album with such consistently good sound — song to song, not copy to copy, of course. Just about every song on here can sound wonderful on the right pressing. If you’re lucky enough to get a Hot Stamper copy, you’re going to be blown away by the Tubey Magical Guitars, the rock-solid bottom end, the jumpin’-out-of-the-speakers presence and dynamics, and the silky vocals and top end. Usually the best we can give you for The Who is “Big and Rockin,” but on Tommy, we can give you ’60s analog magic like you will rarely hear in the decades to follow.

What do high grades give you for this album? Silky, sweet vocals; huge weight to the bottom end; “you are there” immediacy; BIG drums, off the charts rock and roll energy, and shocking clarity and transparency.

No other Who album has all these things in such abundance.

The Most Tubey Magical CD Ever

As hard as it may be for me to say anything nice about the folks at Mobile Fidelity, the CD you see pictured to your left is one of the best sounding I have ever heard. It actually has more Tubey Magic than the average British Track pressing, and certainly more than any British Polydor, Decca, or MCA LP, or any import from any country other than England for that matter. It blows my mind every time I play it.

Now some of you are going to have a hard time wrapping your heads around this next bit, but no two CDs sound the same just as no two records sound the same. Get together five identical copies of a CD and shoot them out yourself. At least one or two of them will tower over the others. I have done this experiment dozens of times and the results are beyond question. You can always blindfold yourself and check your findings if you have any doubts.

The Best of the Sixties and Seventies

This is some of the best High-Production-Value rock music of the ’60s and ’70s. The amount of effort that went into the recording of this album is comparable to that expended by the engineers and producers of bands like Supertramp, Yes, Jethro Tull, Ambrosia, Pink Floyd and too many others to list. It seems that no effort or cost was spared in making the home listening experience as compelling as the recording technology of the day permitted.