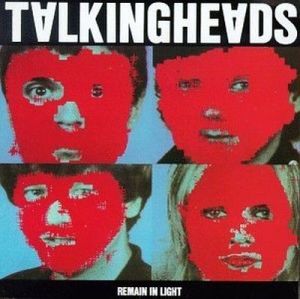 HOT STAMPERS DISCOVERED AT LAST! We’ve been trying to find a great sounding copy of this album forever, and this is the week we finally succeeded. It takes an exceptional pressing to get all the elements correct — the funky bottom end; the processed, multi-tracked vocals; the Brian Eno production weirdness and so on.

This is a brilliant album but a typically problematic record. Most copies get some things right but fail miserably in other areas. There are smeary copies that can’t deliver the punchy bottom you need, grainy copies that make the vocals painful to listen to, and plenty of copies that are just too dark or flat sounding for anyone to enjoy. Note that the first track on both sides will sound the worst. The sound gets better, though, as you get further into the album.

Side one is excellent — punchy and lively with lots of MEAT to the bottom end. It’s also open and transparent with lots of space around the different parts. The sound is cleaner and clearer than the typical pressing, but it isn’t TOO clean — another problem you encounter often when playing multiple copies. The presence is good and there’s real depth to the soundfield.

Side two is EVEN BETTER, in fact, it’s As Good As It Gets (AGAIG)! Everything we were hoping for from this music is here and more — richness, sweetness, BIG TIME presence, weight down low, punchy drum sound and so on. The sound has extraordinarily high-resolution, which lets you hear all the detail and texture of the crazy synths. After playing a big stack of these this week, I feel quite confident saying that you couldn’t find better sound for this album.

We Love The Talking Heads

We’re huge fans of late ’70s / early ’80s art-rock and new wave music, and these guys are obviously some of the best in the biz. I’d be hard pressed to name another act from the era who put out so many good records. Along with this album, More Songs About Buildings And Food, Fear Of Music, and Little Creatures are all works of genius. ’77 is full of good ideas, but it doesn’t sound like a fully realized work of art the way the next four albums did.

You can find Talking Heads albums in the bins of every used record store out there, but most of them just don’t sound any good at all. If they did, you’d see more of them hitting the site, that’s for sure.