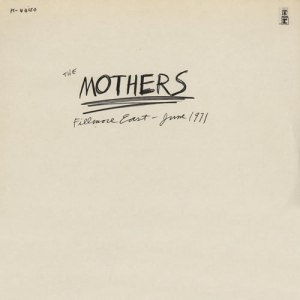 KILLER SOUND ON QUIET VINYL — what are the odds? We’re big fans of this album, and Zappa in general, but it’s incredibly difficult to find copies that do justice to the music. The vinyl is typically thrashed, and even the copies in relatively clean condition usually don’t sound good. This one has about the quietest vinyl you could hope for, playing Mint Minus on both sides, and the sound is just about as good as it gets!

So many pressings don’t let you hear INTO the music. This is a live recording with musicians sprinkled all over the stage — three-dimensional transparency is absolutely KEY to the best pressings, the ones that let you immerse yourself in the spectacle, never losing sight of the individual performances of Zappa and his merry band of obscene nut jobs. This band works BLUE. It will have you in hysterics if you get into the down and dirty spirit of the show. If that doesn’t sound like your thing, steer clear of this one. It’s raunchy as hell, and the raunchiest bits are the most hilarious.

The Greatest Rock Opera Ever

As for the music, it’s a 10 on a scale of 1 to 10. This to me is the ultimate rock opera. In point of fact it’s actually a parody of a rock opera, which makes it doubly enjoyable.

The two former leaders of The Turtles (aka Flo and Eddie) variously play groupies (What Kind Of Girl Do You Think We Are) and members of the band. As the saying goes, hilarity ensues.

What makes this album so special is that the rock songs that are generated out of this story are actually great rock songs. They’re not filler. They’re not connecting tissue. They’re good songs with strong melodies that stand up on their own. Moreover, connected to each other through this crazy story sung by men pretending to be women, they become something even greater: a True Rock Opera. Better than that: A True Rock Opera Parody that’s as hilarious as it is musically satisfying. Zappa missed his calling — he should have dedicated himself to musical theatre. He has a real gift for it. This album is proof.

The entertainment value of this record is as good as it gets. Off the scale. If you’re a fan of The Firesign Theater, Zappa, improv comedy and such like, you will love this album.

Little House I Used to Live In
The Mud Shark

This is the place where the super spacious wall to wall sound found on the Hot Stamper copies can really be heard. Your speakers should disappear at about this point. Let the games begin.

What Kind of Girl Do You Think We Are?
Bwana Dik
Latex Solar Beef
Willie the Pimp, Pt. 1

Willie the Pimp, Pt. 2
Do You Like My New Car?
Happy Together
Lonesome Electric Turkey
Peaches en Regalia

Listen for rich full keyboards on this track, with solid bass below. Most copies thin out these instruments and those copies are what we refer to as Not So Hot Stampers.

This track should also ROCK. It needs to be dynamic and punchy to convey the energy of the music. We love Hot Rats and this is the only way to hear Hot Rats Live (other than a bootleg), so turn it up and rock it out man!

… the beginnings of Frank Zappa’s tactic of making complex music more accessible with half-sardonic arena-frontman antics and crowd-pleasing dirty jokes. Whether one considers the results funny and parodic or crass and pandering, the band is undeniably good, especially as showcased on “Little House I Used to Live In,” “Willie the Pimp, Pt. 1,” and “Peaches en Regalia.”

The Mud Shark and More

Fillmore East – June 1971 was a live concept-like album. It was a peek-behind-the-curtain of the life of a rock band on the road as narrated by Frank Zappa, and contains many thematic elements that, because of time and budget constraints, couldn’t be included in the similar movie 200 Motels.

The most famous part of the album is “The Mud Shark”, a telling of a story told to Mother Don Preston by some members of Vanilla Fudge about a hotel, Seattle’s Edgewater Inn, where guests could fish from their rooms. In the tale, a mud shark is caught by one of the members of Vanilla Fudge or its crew and, when combined with a groupie and a movie camera, depravity ensues. Although not stated in “The Mud Shark,” this 1969 incident, now referred to as “the Shark episode,” also involved Led Zeppelin’s drummer John Bonham and road manager Richard Cole, with Vanilla Fudge’s singer/keyboardist Mark Stein operating the movie camera.

Frank and the Mothers then portray stereotypically egotistical members of a rock band “negotiating” with a groupie and her girlfriends for a quick “roll in the hay.” The girls are insulted that the band thinks they are groupies and that they would sleep with the band just because they are musicians. They have standards; they will only have sex with a guy in a group with a “big, hit single in the charts – with a bullet!” and a “dick that’s a monster.”

In “Bwana Dik”, singer Howard Kaylan assures the girls that he is endowed beyond their “wildest Clearasil-spattered fantasies.” And, not to be put off by the standards of these groupies, the band sings the girls the Turtles (of which Kaylan, Volman, and Pons had been members) hit “Happy Together”, to give them their “bullet”.

The album ends with an encore excerpt including both Zappa’s familiar “Peaches en Regalia” and what was possibly his most successful early-rock and roll pastiche, “Tears Began to Fall” (also issued as a single). – Wikipedia