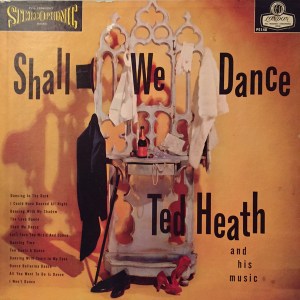 One of the best sounding records we have ever played, the Gold Standard for Tubey Magical Big Band. Both sides are huge, rich, weighty and dynamic like few records you have ever heard. Three elements create the magic here: Kingsway Hall, Kenneth Wilkinson and the Decca “Tree” microphone setup.

Years ago we wrote in another listing “We had a copy of Heath’s Shall We Dance not long ago that had some of the biggest, richest, most powerful sound I have ever heard. Watch for Hot Stampers coming to the site soon.” Well, now they’re here, and this copy fulfills the promise of the album like no copy we have ever played.

DEMO DISC SOUND barely begins to do this one justice. This is Audiophile Quality Big Band sound to beat them all. The American big bands rarely got the kind of sound that the Decca engineers were able to achieve on records like this. For one thing they didn’t have Kingsway Hall, Kenneth Wilkinson or the Decca “Tree” microphone setup.

Unlike some of the American big band leaders who were well past their prime by the advent of the two-channel era, Heath is able to play with all the energy and verve required for this style of music. He really does “swing in high stereo” on these big band dance tunes.

This copy of Shall We Dance has a lot in common with the other Decca and Living Stereo titles we’ve listed over the years, albums by the likes of Henry Mancini, Esquivel, Dick Schory, Edmundo Ros, Prez Prado and a handful of others. Talk about making your speakers disappear, these records will do it!

An album like this is all about Tubey Magical Stereoscopic presentation. For us audiophiles both the sound and the music here are enchanting. If you’re looking to demonstrate just how good 1959 All Tube Analog sound can be, this killer copy is the record that can do it.

This IS the sound of Tubey Magic. No recordings will ever be made like this again, and no CD will ever capture what is in the grooves of this record. Someday there may well be a CD of this album, but those of us in possession of a working turntable could care less.

What You Want on Shall We Dance

Sound that is smooth, dynamic, open and clear. The kind of richness and weight that allows the music to get bigger and even more energetic without ever getting harsh or strained. The sound can really be jumpin’ on this copy and never hurt your ears.

The brass should never be “blary” the way it can be on so many Big Band or Dance Band records from the ’50s and ’60s. (Basie’s Roulette records tend to have a bad case of blary brass as a rule.)

Add in sharp transients and correct tonality and timbres and you have yourself one helluva White Hot Stamper pressing.

Ted Heath was a giant in the world of Big Band and everybody who was anybody knew it.