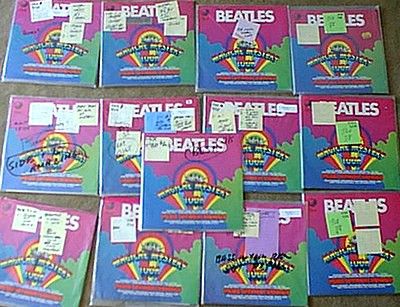 This is a VERY old and somewhat embarrassing commentary about how We Was Wrong.

This German pressing has dramatically different sound than that found on other Hot Stamper pressings of MMT we’ve had on the site. I used to be convinced that its sound was clearly superior to the regular German MMT LPs.

Back in the late ’80s and into the ’90s this was the pressing that I was certain blew them all out of the water. 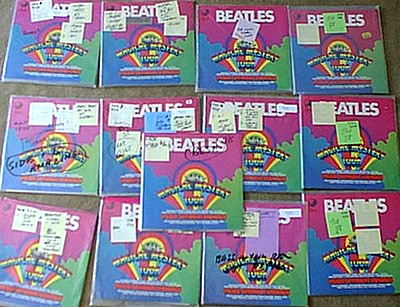 We know better now. We call this version the “Too Hot” Stamper pressing — the upper mids and top end are much too boosted to be enjoyable on top quality equipment.

It does have some positive qualities though. It has substantially deeper bass than any other version; in fact, it has some of the deepest bass you will ever hear on a pop recording. It can literally rattle the room when Paul goes deep on Baby You’re A Rich Man.

It also uses a slightly different mix on some tracks and is mastered differently in terms of levels. The level change is most obvious at the beginning of Strawberry Fields, where it starts out very quietly and gets louder after a short while, unlike all other versions which start out pretty much at the same level.

The effect is pleasing, you can even say powerful, but probably not what The Beatles intended, as no other copy I’ve ever heard utilizes the same quiet opening. An unknown mastering engineer made the choice, he created a new sound for the song, probably because he didn’t like all the tape hiss at the opening when few instruments were playing loud enough to mask it.

With this mix the record is now more of a hi-fi spectacular — great for waking up sleepy stereo systems but not the last word in natural sound.