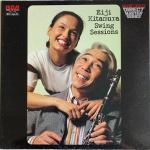 If you’re a fan of clarinet-led swing jazz, you’ll have a hard time finding a better record than this. The music is absolutely wonderful. Not only that, but it has DEMO DISC sound as well.

Direct-to-Disc Recording recorded live at Iruma City Auditorium, Saitama, Japan on April 21, 1978. Eiji Kitamura and His Allstars include Eiji on clarinet, Ichiro Masuda on vibraphone, Yoshitaka Akimitsu on piano, Yukio Ikezawa on bass, Hiroshi Sunaga on drums and Judy Anton provides vocals on “What a Little Moonlight Can Do.”

This album was recorded by the Direct-to-Disc recording method, to capture the natural reverberation of the 1,200 seat concert hall. Various kinds of recording equipment were brought in parts to the backstage of the hall for the recording then reassembled and adjusted. Two whole days were spent adjusting all the equipment.