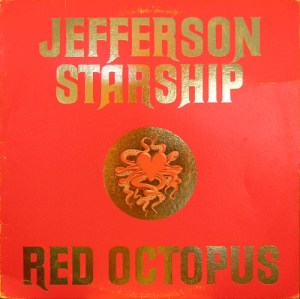 This vintage Grunt pressing has the kind of Tubey Magical Midrange that modern records can barely BEGIN to reproduce. Folks, that sound is gone and it sure isn’t showing signs of coming back. If you love hearing INTO a recording, actually being able to “see” the performers, and feeling as if you are sitting in the studio with the band, this is the record for you. It’s what vintage all analog recordings are known for — this sound.

What We Listen For on Red Octopus

Technically speaking, Red Octopus was the first album credited to Jefferson Starship, though practically the same lineup made Dragon Fly, credited to Grace Slick/Paul Kantner/Jefferson Starship. The difference, however, was crucial: Marty Balin was once again a fully integrated bandmember, writing or co-writing five of the ten tracks. And there can be little doubt that it was Balin’s irresistible ballad “Miracles,” the biggest hit single in the Jefferson Whatever catalog, that propelled Red Octopus to the top of the charts, the only Jefferson album to chart that high and the best-selling album in their collective lives.

Like Dragon Fly, Red Octopus reflected a multiplicity of musical tastes; there were ten credited songwriters, seven of whom were in the band. If there is any consistency in this material, it is in subject matter (love songs). The album is more ballad-heavy and melodic than the Airplane albums, which made it more accessible to the broader audience it reached, though “Sweeter Than Honey” is as tough a rocker as the band ever played.