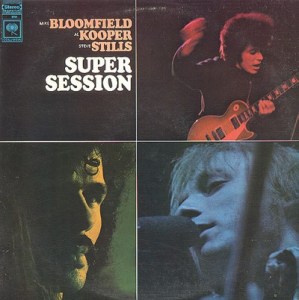 Here’s a copy that gets the midrange right. Nice and open with lots of space around all of the instruments, tight punchy bass, and an extended top end. The energy level is right up there with the best we played.

Man’s Temptation, track 3 on side one, has got some seriously bright EQ happening (reminiscent of the first BS&T album), so if that song even sounds tolerable in the midrange you are doing better than expected.

Bright, gritty, spitty, edgy, harsh, upper-midrangy vocals. The Red Labels tend to have more problems of this kind, but plenty of original 360 pressings are gritty and bright too. Let’s face it, if the vocals are wrong, this album pretty much falls apart.

Most copies are far too bright and phony sounding to turn up loud; the distortion and grit are just too much at higher volumes. On the better copies, with more correct tonality and an overall freedom from distortion, you can turn the volume up and let Super Session rock.

We used to like the Mobile Fidelity pressing of this record, but without one around it’s hard to say what the comparison would be like today. I can tell you this much: there is deep bass on this recording. That means that the Mobile Fidelity is not going to be able to reproduce the bass the way the real pressings can because MoFi bass is almost always wooly and never deep.

There are no doubt other reissues of this album available now. The cheap Columbia 180 gram version is terrible; the other ones we haven’t played. That said, we wouldn’t expect them to sound very good.

What We’re Listening For on Super Session

It Takes a Lot to Laugh, It Takes a Train…
Season of the Witch
You Don’t Love Me
Harvey’s Tune

As the Beatles’ Sgt. Pepper’s Lonely Hearts Club Band (1967) had done a year earlier, Super Session (1968) initially ushered in several new phases in rock & roll’s concurrent transformation. In the space of mere months, the soundscape of rock shifted radically from two- and three-minute danceable pop songs to comparatively longer works with more attention to technical and musical subtleties. Enter the unlikely all-star triumvirate of Al Kooper (piano/organ/ondioline/vocals/guitars), Mike Bloomfield (guitar), and Stephen Stills (guitar) — all of whom were concurrently “on hiatus” from their most recent engagements… This is one of those albums that seems to get better with age… This is a super session indeed.

Can the Red Label reissues sound any good?

Why yes, they can, and here’s why. Every once in a while, when it comes time to stamp out some more copies of slow but still-selling records, “back catalog” as they are known in the trade, someone has to go into the vault and find a tape with which to master. Maybe that person finds a real master tape. Or maybe that person finds a master tape and makes a really high quality dub of it to master from. Either one of those possibilities might produce a great sounding final product relative to the sub-generation, EQ’d, compressed cutting tape used to make most copies, including the originals.

Don’t get me wrong: Many originals are superb. All things being equal, I would try to find an original if I were looking for this record. But all things are never equal. There are too many variables involved in the making of a record. One can never predict what the best sounding version is gonna be.