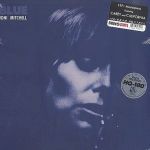 Another in our series of Home Audio Exercises, one we created all the way back in 2007. If you want to learn more about doing your own shootouts, this listing has lots of good advice.

In 2007, a Milestone Year for us here at Better Records, we mentioned to our customers that we would not be carrying the new 180 gram Rhino pressing of Blue. We noted:

Since Kevin and Steve are friends of mine I won’t belabor its shortcomings. Let’s just say I think you can do better.

Down the road when we’ve had a chance to do a shootout amongst all our best copies, we will be offering something more to our liking. I recommend instead — and this is coming from a die-hard LP guy, someone who disconnected his home CD player over two years ago and only plays the damn things in the car — that you pick yourself up a nice used copy of the gold CD Hoffman mastered for DCC. It’s wonderful.

Some people are already upset with us over this decision, actually going so far as to question our motives, if not our sanity. Without a doubt we feel this will end up being the single most controversial stance we’ve ever taken. I predict that a great number of audiophiles are going to get really upset over our criticism of this new pressing. We are going to get emails like crazy asking us to explain what on earth could possibly be wrong with such a wonderful sounding LP. The writers of these emails will no doubt extoll its virtues relative to the other pressings they may have heard, and, finding no other reasonable explanation, these writers will feel impelled to question both the quality of our playback equipment and — yes, it’s true — even our ability to recognize a good record when it’s spinning right on our very own turntable.

Some of these individuals may actually be our customers. Obviously we don’t want our customers to be upset with us. We would much prefer to be honest and forthright; after all, it’s the hallmark of our operation. We’re the guys in this dodgy business that pride ourselves on giving it to you straight. Letting the chips fall where they may. Criticizing the hell out of the naked emperors who write for the audiophile rags. Imploring you to listen critically for yourself and not to buy into the hype.

We’re those guys, the ones dedicated to finding you truly Better Records, not just the same old crap that other people want you to think are better records: the 180 gram remasters and Japanese pressings and References and Cheskys and TAS List titles and Stan Ricker half-speeds and Fragiles and For Dukes and Dafos’s and Morph the Cats, etc., etc., etc.

Screw all that crap. We sell it but we sure don’t think you should be buying it.

We’re those guys, never ones to shy away from controversy, especially if it actually fulfills some purpose, like getting you away from audiophile garbage and into some real music with honest-to-goodness high-fidelity sound.

But does criticizing and refusing to carry Blue really do anybody any good? Aren’t we just asking for trouble? Wouldn’t it be easier for us to just take your twenty five bucks and say that the new Blue is better than the average domestic copy and leave it at that, the less said the better? Who needs the headaches?

Think of all the emails that will come flooding in because of our anti-Blue stance. People will want answers. They will consider it our duty to explain the contrarian position we have adopted. It won’t be good enough to just say we think you can do better. Do better how? Exactly what will get better when we do better? Exactly what’s not good enough about the one I already bought? And if you can’t tell us what’s wrong with this one, how will we know how to go about finding a copy that you think communicates the musical values of Blue better?

Oh dear. Yes, I see your point. It is a bit of a problem, no question about it.

You Call That Fun?

How you say? Easy. We’re going to do it with the new and exciting Joni Mitchell Blue Game. It’s fun for the whole family! (Actually it’s not. Your family will want nothing to do with it, and even most audiophiles are not going to want to play. But it’s such a goofy-sounding turn of phrase we had to leave it in.)

Instead of us telling you what’s right and wrong with the new Blue, you’re going to tell us. Doesn’t that sound like fun? No? No matter, we can come back to it later.

You may have noticed that there is a great deal of commentary on the site about what we listen for, what we like, how to become a better listener, how to tweak your system, how we do these laborious shootouts to find you Hot Stampers, and on and on, ad infinitum and for some people ad nauseum. “We do the work so you don’t have to,” right? Well in this game, you do the work so we don’t have to. Now that’s what we call a fun game!

The game basically involves you doing for Blue what we do for three or four different titles each and every week [now that number is three or four per day!]: Hot Stamper shootouts. It’s our bread and butter. It’s our claim to fame. We spend more time doing these crazy comparisons than everything else we do around here combined. They’re time-consuming and exhausting, but they’re also fun. Discovering amazing pressings of your favorite music is fun. Since our shootouts almost always involve our favorite albums (we get to pick them, so why pick anything else?), we get to hear pretty much nothing but our favorite music played over and over. On top of that we usually get to hear it sound better than we ever thought it could.

And then you get to buy the record and you get to hear it sound better than you ever thought it could. See why we spend so much time on these shootouts? Because everybody wins. We love ’em and you love ’em. (As an added benefit they also build strong bodies twelve ways.)

So how do you play?

It’s easy. And fun! (Actually, that may not be true for many of you. A fairly sizable contingent of the audiophile public likes to flip the old system on, crack open a beer and throw on a favorite record or two for a relaxing evening of musical decompression. All that tweaky stuff and intensive listening is for the birds. If you’re one of those guys, you might as well stop reading right now.

This game is not about relaxing. This game is about learning to hear better, the end result of which (we hope) will be a better understanding of records and audio, and the added enjoyment that follows from that understanding. If audio ignorance is bliss in your world, okay by me. If, on the other hand, you find that the more you know about this hobby the more you actually enjoy doing it, and the more you get out of it, then this is the perfect game for you. This game is designed to sharpen your listening skills, and we can all use our listening skills sharpened, can’t we?

Playing the Joni Mitchell Blue Game is pretty much like doing one of our shootouts, but on a smaller scale. Although we might play twenty or thirty copies of a record to find the handful that will make it to the site, we don’t expect you to. Cleaning and playing that many copies of a single album would be a job, and I’m guessing you already have a job and don’t need another one.

But you have to have enough copies to be able to find at least one or two pretty good ones — not Hot Stampers necessarily, but Very Good or Pretty Good Stampers let’s say. Five strikes us a nice number of copies to start with. You will need five domestic, non-audiophile, copies of Blue to get started — reissues, originals, promos, whatever you can find that’s clean and you think might sound good. The vinyl can be noisy; that’s not what we’re listening for. We want to find good sounding copies, no more. no less. (Imports of Blue rarely sound any good, so let’s leave them out.)

You Can’t Play Without the Right Cleaning Fluids

Next, clean them all. You can’t play this game without cleaned records. If you don’t use the right stuff you are probably wasting your time trying to figure out which pressing is going to sound better. The one with the least amount of crud in the grooves might sound the best, but that’s not the one that’s mastered the best or pressed the best. All the crud must be removed before the latter two qualities can be evaluated.

Get out a yellow pad and use a separate page to take notes for each individual pressing. If you have two copies with the same stampers, more’s the better — they won’t sound the same, and noticing and noting exactly what the differences are is what gets your ears tuned.

Note exactly what sounds right and wrong, better and worse, about any sound on any song, then go to another copy and listen for exactly the qualities or shortcomings you just noticed.

This will take a while, but eventually you should have at least one side one you like, and at least one side two, and they probably will not be on the same slab of vinyl, although there’s no reason they can’t be.

This is where we may join in the “fun”. We’re guessing that if you do all this work, you will hear what’s better about the domestic pressings of Blue compared to the new 180 gram LP. If, however, you don’t like your domestic copies better, we have a few specific qualities we would like you to listen for in some of the songs. This may help you to recognize certain qualities we heard in our domestic copies that were lacking in the new remaster.

We’re convinced that if you have good equipment, and even passable pressings of Blue, you will agree with us as to which LP gets Blue better. But it’s up to you to hear what’s better, and to know why it’s better. Why the sound of one version “works” and the other one doesn’t. This is what makes it a fun game. It’s no fun if we just tell you what we think. Then it becomes just another opinion, not a whole lot different from any other opinion. The audio world is full of them.

But if you really make the effort to listen for yourself, to get down in the trenches and do the real back-and-forth, pain-in-the-ass work, then you will have a very special kind of opinion, one that is pretty rare in the audiophile world. You will have an informed opinion. You didn’t read it somewhere. Nobody told you what the answer was. You came up with your own answer. You heard the differences with your own two ears. Who cares what anybody else thinks? Take your beat-up antiquated analog pressing of Blue over to your friends’ houses and play it for them so that they can see why it’s better too. Spread the word. Make the world safe for old records. We’re behind you 100%.

Unless you disagree with us and prefer the new Blue, in which case we can only conclude that you are deaf or have bad equipment.

Just kidding! But seriously, it’s one of those two if you like the new one.