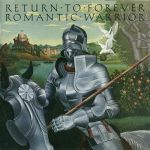 More of the Music of Return to Forever

Romantic Warrior is my favorite JAZZ/ROCK FUSION album of all time. As good as the music is, the sound is even better. This is the Jazz/Rock Demo Disc that stands head and shoulders above the rest. In my experience, no record of this kind is more DYNAMIC or has better BASS. Not one. Demo Disc doesn’t begin to do this kind of sound justice.

But the Super Sound has a purpose, a raison d’etre. This is the kind of music that requires it; better yet, DEMANDS it. In truth, the sound is not only up to the challenge of expressing the life of the music on this album, it positively ENHANCES it.

Those monster Lenny White drum rolls that run across the soundstage from wall to wall may be a recording studio trick, but they’re there to draw your attention to his amazing powers, and it works! The drums are EVERYWHERE on this album, constantly jumping out of the soundfield and taking the music into the stratosphere where it belongs.

I can’t think of another record that rocks as hard, and it’s not even a real rock record! We find ourselves playing records like Houses of the Holy and Zep II and Dark Side of the Moon for hour upon hour, with dozens of copies to get through, and we do it on a regular basis. If anybody knows Big Rock Sound, it’s us. But can we really say that those albums rock any harder than this one? Romantic Warrior is to Jazz what Zep II is to Rock — the ultimate statement by a band at the absolute top of their game.

Perhaps “The Sgt. Peppers of Jazz Rock” is a more fitting title: The perfect wedding of the ultimate musical statement and the ultimate recording statement. There can only be one, and this is it. I have literally listened to this album hundreds of times (I keep a cassette of it in my car) and to this day I still discover nuances in the recording and the performance every time I hear it! Any time you make an improvement to your stereo, this is the kind of record that will show you what you’ve accomplished.

Lenny White only played on four albums with RTF. His contribution here is essential — the drumming on this album is out of this world, some of the best I have ever heard. Years ago I went to see the Miles Davis tribute tour, just to see Lenny White drum. He did not disappoint. He was banging the hell out of his kit. He’s got monstrous biceps and he was really hurtin’ those drums.

But he’s not really the star of this show. He’s one of four stars. The putative leaders are of course Chick Corea and Al DiMeola. I’ve heard many of their albums, and none of them can hold a candle to the work they do here. DiMeola especially deserves the highest praise for what he brings to the table. I know of no other guitarist who can rock with the best of them, with a completely fuzzed out line, and turn around and play the most lyrical and subtle acoustic parts, not showing off, just adding the right licks in the right places.

Stanley Clarke also deserves high praise. He adds another brilliant layer to the mix; in places where he bows the bass the sound is extraordinary.