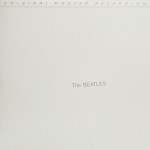 The last time I played a copy of the MoFi I could not believe how ridiculously bright, phony and compressed it was. As sibilant as any Beatles record they ever did. Cry Baby Cry spits like crazy!

And to think I used to like their version when it came out back in the ’80s!

Those crazy Beatles! It’s more than just a cool “effect.” It actually seems to kick the energy and power of the song up a notch. It’s clearly an accident, but an accident that works. I rather doubt George Martin approved. That kind of “throw the rule book out” approach is what makes Beatles recordings so fascinating, and The White Album the most fascinating of them all.

The EQ for this song is also a good example of something The Beatles were experimenting with, as detailed in their recording sessions and later interviews with the engineers. They were pushing the boundaries of normal EQ, of how much bass and treble a track could have. This track has seriously boosted bass, way too much, but somehow it works!

In its way this is an ideal record to gauge how much progress you have made in audio. Here is what I had to say about a Brewer and Shipley album that ranks high on the DOR scale:

I can also tell you that if you have a modest system this record is just going to sound like crap. It sounded like crap for years in my system, even when I thought I had a good one. Vinyl playback has come a long way in the last five or ten years and if you’ve participated in some of the revolutionary changes that I talk about elsewhere on the site, you should hear some pretty respectable sound. Otherwise, I would pass. On the Difficulty of Reproduction scale, this record scores fairly high. You need lots of Tubey Magic and freedom from distortion, the kind of sound I rarely hear on any but the most heavily tweaked systems, the kind of systems that guys like me have been slaving over for thirty years. If you’re a Weekend Warrior when it comes to stereo, this is not the record for you.

Much like Synchronicity, this is a tough record to get the right sound out of — even if you do have an excellent pressing. It took a long time to get to the point where we could clean the record properly, twenty years or so, and about the same amount of time to get the stereo to the level it needed to be, involving, you guessed it, many of the Revolutionary Changes in Audio we tout so obsessively. It’s not easy to find a pressing with the low end whomp factor, midrange energy and overall dynamic power that this music needs, and it takes one helluva stereo to play one too. As we’ve said before about these kinds of recordings — Ambrosia; Blood, Sweat and Tears; The Yes Album; Dark Side of the Moon, Led Zeppelin II — they are designed to bring any audio system that tries to reproduce them to its knees.

If you have the kind of big system that a record like this requires — demands even — you are going to hear some amazing sound when you drop the needle on one of our Hot Stampers.