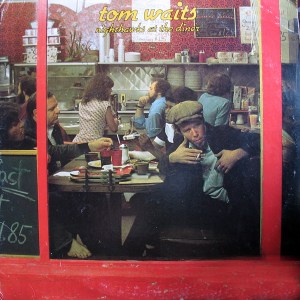 A stunning Top Copy of this Tom Waits classic! A superb recording, with much credit due to Waits’ constant collaborator Bones Howe who produced and engineered. It’s a live-in-the-studio romp through Los Angeles with Waits playing the role of tour guide, and the results are wonderful.

At its best, this album has the immediacy and energy of a real live performance, but the typical copy just doesn’t bring it to life. This one is a big step up on all four sides, with the kind of life and clarity we just don’t hear often enough! Side two in particular has the kind of superb clarity and three-dimensional soundstage that puts you right there in the studio.

This album was recorded live at The Record Plant back in 1975, and, while I can’t be certain, it sure seems there are no overdubs or post-performance additions. There’s a touch of hardness to the vocals at times, but it was on every copy we played and it’s obviously on the tape. It’s the kind of sound we hear on Johnny Cash records and it just seems like a by-product of the microphones these guys used. It doesn’t seem to far a reach to imagine that an iconoclast like Waits might prefer an old-timey microphone sound that doesn’t soften or smooth his vocal style. (For those in search of buttery vocals, there’s usually an Al Stewart record or two on the site. This ain’t the one for you.)

We played quite a few copies and while we were absolutely blown away by the best pressings, the typical copies left us cold. When you have a copy that’s veiled and lacks presence, the magic is GONE. Todd and Dave from our shootout crew are very familiar with this album and couldn’t believe how much of a step up the Hot Stampers were from the average copy. They were a bit sad at the thought of going back to their average pressings (as well as the CD version) after hearing The Real Sound, but such is life at Better Records.

I’m not very familiar with the musicians that make up the backing band here, but they are a top-notch crew. The way they interact with Waits as he spins stories, songs, and even a few jokes is in the very best jazz tradition. Waits actually hooked up with the great drummer Shelley Manne to record his next album (the classic Small Change) so this is a man who clearly knows how to pick a band!

Intro
Better off Without a Wife
Nighthawk Postcards

For his third album, Nighthawks at the Diner, Tom Waits set up a nightclub in the studio, invited an audience, and cut a 70-minute, two-LP set of new songs. It’s an appropriate format for compositions that deal even more graphically and, for the first time, humorously with Waits’ late-night world of bars and diners. The love lyrics of his debut album had long since given way to a comic lonely-guy stance glimpsed in “Emotional Weather Report” and “Better Off Without a Wife.” But what really matters is the elaborate scene-setting of songs like the six-and-a-half-minute “Spare Parts,” the seven-and-a-half-minute “Putnam County,” and especially the 11-and-a-half-minute “Nighthawk Postcards” that are essentially poetry recitations with jazz backing. Waits is a colorful tour guide of midnight L.A., raving over a swinging rhythm section of Jim Hughart (bass) and Bill Goodwin (drums), with Pete Christlieb wailing away on tenor sax between paragraphs and Mike Melvoin trading off with Waits on piano runs.