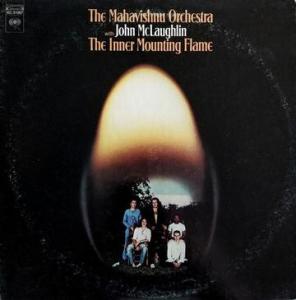 It’s hard to think of another record that rocks as hard, and it’s not even a real rock record! We find ourselves playing albums like Zep II and Back in Black for hour after hour, with dozens of copies to get through, and we do it on a regular basis. If anybody knows Big Rock Sound, it’s us. But can we really say that those albums rock any harder than this one?

The main problem we heard again and again on the copies we were auditioning was an obvious lack of top end extension and clarity. Without all the top there is not enough space for all the instruments to occupy. It then becomes easy for the sound to get congested and the musical lines to become jumbled, with the most subtle elements getting progressively more and more lost in the dense mixes the band is known for.

With everyone blasting away at the same time the mixes on the album get very dense indeed. Big speakers in a carefully treated room are a must if you want to play The Inner Mounting Flame at the loud levels we prefer.

The sides that had the most space and the biggest, tightest low ends tended to do everything else right as well. The energy was rarely less than phenomenal, but that energy only works to increase the listener’s involvement when there is enough space and enough weight to keep the sound opened up above and anchored down below.

5 Stars All Over the Place

In our experience, few recordings within this genre can begin to compete with the Dynamics and Energy of the best pressings of the album — if you have the system designed to play it. (Even if you don’t the album will still rock like crazy.)

All songs are by John McLaughlin on both sides

Vital Transformation
The Dance of Maya
You Know You Know
Awakening

This is the album that made John McLaughlin a semi-household name, a furious, high-energy, yet rigorously conceived meeting of virtuosos that, for all intents and purposes, defined the fusion of jazz and rock a year after Miles Davis’ Bitches Brew breakthrough. It also inadvertently led to the derogatory connotation of the word fusion, for it paved the way for an army of imitators, many of whose excesses and commercial panderings devalued the entire movement. Though much was made of the influence of jazz-influenced improvisation in the Mahavishnu band, it is the rock element that predominates, stemming directly from the electronic innovations of Jimi Hendrix.

The improvisations, particularly McLaughlin’s post-Hendrix machine-gun assaults on double-necked electric guitar and Jerry Goodman’s flights on electric violin, owe more to the freakouts that had been circulating in progressive rock circles than to jazz, based as they often are on ostinatos on one chord. These still sound genuinely thrilling today on CD, as McLaughlin and Goodman battle Jan Hammer’s keyboards, Rick Laird’s bass, and especially Billy Cobham’s hard-charging drums, whose jazz-trained technique pushed the envelope for all rock drummers.