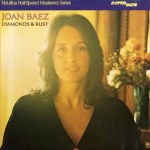 One of the best Half Speed Mastered Records we have ever played.

In our recent shootout we were shocked — shocked — to hear how good our old copy of Diamonds and Rust on Nautilus sounded head to head against the best first pressings. Hard to believe, but it actually beat every one.

If I hadn’t heard it with my own two ears I wouldn’t have believed it.

Play Jesse on side two to hear the lovely space of the studio, as well as more harmonic extension on the acoustic instruments. Watch out for track two; the EQ on the vocal is always a problem.

This copy has the kind of sound we look for in a top quality Singer Songwriter album. A few qualities to listen for:

And last but not least, transparency, the quality of being able to see into the studio, where there is plenty of musical information to be revealed in this sophisticated Folkie Pop recording from 1975.

The sound varies quite a bit from track to track, no doubt a result of each recording having to be tailored to the different groups of studio cats and the necessity for overdubs of strings, pedal steel guitars, even tasteful(!) synths.

Another thing this album has going for it is top-notch musicians, including Larry Carlton, Tom Scott, David Paich, Wilton Felder, and Better Records fave Joe Sample.

With the Vietnam War winding down, Joan Baez, who had devoted one side of her last album to her trip to Hanoi, delivered the kind of commercial album A&M Records must have wanted when it signed her three years earlier.

But she did it on her own terms, putting together a session band of contemporary jazz veterans like Larry Carlton, Wilton Felder, and Joe Sample, and mixing a wise selection from the work of current singer-songwriters like Jackson Browne and John Prine with pop covers of Stevie Wonder and the Allman Brothers Band, and an unusually high complement of her own writing.

A&M, no doubt recalling the success of her cover of the Band’s “The Night They Drove Old Dixie Down,” released her version of the Allmans’ “Blue Sky” as a single, and it got halfway up the charts.

But the real hit was the title track, a self-penned masterpiece on the singer’s favorite subject, her relationship with Bob Dylan. Outdoing the current crop of confessional singer/songwriters at soul baring, Baez sang to Dylan, reminiscing about her ’60s love affair with him intensely, affectionately, and unsentimentally. It was her finest moment as a songwriter and one of her finest performances, period, and when A&M finally released it on 45, it made the Top 40, propelling the album to gold status.

But those who bought the disc for “Diamonds & Rust” also got to hear “Winds of the Old Days,” in which Baez forgave Dylan for abandoning the protest movement, as well as the jazzy “Children and All That Jazz,” a delightful song about motherhood, and the wordless vocals of “Dida,” a duet with Joni Mitchell accompanied by Mitchell’s backup band, Tom Scott and the L.A. Express. The cover songs were typically accomplished, making this the strongest album of Baez’s post-folk career.