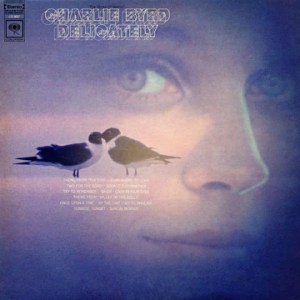 Hearing is definitely believing, especially in our unique corner of the record business — we don’t give a fig about who, why or when a record was made; we just play it and judge it based on what we hear in its grooves. Needless to say. this pressing of the album was judged to be a knockout.

Apparently the album has garnered attention from other audiophiles – HDTracks offers a high-rez digital download of it!

This vintage Columbia 360 pressing has the kind of Tubey Magical Midrange that modern records rarely even BEGIN to reproduce. Folks, that sound is gone and it sure isn’t showing signs of coming back. If you love hearing INTO a recording, actually being able to “see” the performers, and feeling as if you are sitting in the studio with the band, this is the record for you. It’s what vintage all analog recordings are known for — this sound.

What the best sides of Delicately have to offer is not hard to hear:

What We’re Listening For on Delicately

Theme From “The Fox”
Somewhere, My Love
Theme From “Valley Of The Dolls”
Try To Remember
Two For The Road
When I Look In Your Eyes

Born into a musical family, Byrd experienced his first brush with greatness while a teenager in France during World War II, playing with his idol Django Reinhardt. After some postwar gigs with Sol Yaged, Joe Marsala and Freddie Slack, Byrd temporarily abandoned jazz to study classical guitar with Sophocles Papas in 1950 and Andrés Segovia in 1954. However he re-emerged later in the decade gigging around the Washington D.C. area in jazz settings, often splitting his sets into distinct jazz and classical segments.

He started recording for Savoy as a leader in 1957, and also recorded with the Woody Herman Band in 1958-59. A tour of South America under the aegis of the U.S. State Department in 1961, proved to be a revelation, for it was in Brazil that Byrd discovered the emerging bossa nova movement. Once back in D.C., he played some bossa nova tapes to Stan Getz, who then convinced Verve’s Creed Taylor to record an album of Brazilian music with himself and Byrd. That album, Jazz Samba, became a pop hit in 1962 on the strength of the single “Desafinado” and launched the bossa nova wave in North America. Thanks to the bossa nova, several albums for Riverside followed, including the defining Bossa Nova Pelos Passaros, and he was able to land a major contract with Columbia…

In 1973, he formed the group Great Guitars with Herb Ellis and Barney Kessel and also that year, wrote an instruction manual for the guitar that has become widely used. From 1974 onward, Byrd recorded for the Concord Jazz label in a variety of settings, including sessions with Laurindo Almeida and Bud Shank. He died December 2, 1999 after a long bout with cancer.