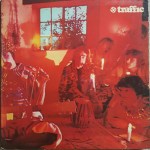 This British Sunray Label pressing has THE BEST SOUND I’VE EVER HEARD FOR THIS ALBUM! None of the Pink Label originals that we played had the deep, powerful, punchy bass that this pressing has, coupled with an extended, sweet top end.

This is one of the best sounding Traffic records ever made. Musically it’s hit or miss, but so is every other Traffic record, including my favorite, John Barleycorn. The best songs here are Heaven Is In Your Mind, Dear Mr. Fantasy, and Coloured Rain.

The first of these is worth the price of the album alone, in my opinion. It’s a wonderful example of late ’60s British psychedelic rock.

According to Capaldi, when the group later went to Olympic to cut the song, “We tried originally to record it regularly, with all of us in little booths and all, but we weren’t feeling anything. So we got rid of the booths and we all played together in this big room. We ended up cutting the song very live.”

Eddie Kramer: “We had the band set up on a riser at one end of the studio, which is a big room — maybe 65, 70 feet long by about 45 wide with about a 30-foot ceiling. They were set up as if they were onstage and I recorded them live, straight to 4-track. I can remember with such clarity the time when we were actually cutting ‘Dear Mr. Fantasy’: We were in the middle of a take and there’s a part where the tempo changes — it jumps — and I look around and Jimmy Miller’s not in the control room.

The next thing I see out of the corner of my eye is Jimmy hauling ass across the room, running full tilt. He jumps up on the riser, picks up a pair of maracas and gets them to double the tempo! That, to me, was the most remarkable piece of production assistance I’d ever seen. They were shocked to see him out there, exhorting them to double the tempo. Their eyes kind of lit up. It was amazing. That was Jimmy!

“I have such fond memories of those sessions,” Kramer says. “Everybody was thinking in terms of, ‘How do we make this record better and more exciting?’ And Jimmy Miller was the ringleader, pushing everybody’s buttons in the right way, in a nice way; mine, too. He would allow me to do wacky things, and he would encourage it — not that I needed much encouragement — but Jimmy always had a firm hand on the tiller.”