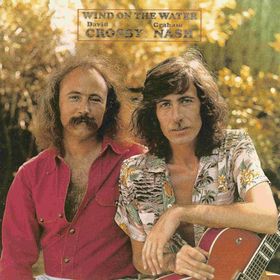 As a budding audiophile, I went out of my way to acquire any piece of equipment that could make these records from the ’70s (the decade of my formative music-buying years) sound better than the gear I was then using. It’s the challenging recordings by Crosby, Stills, Nash and Young, as well as scores of other pop and rock artists like them, that drove my pursuit of higher quality audio, starting all the way back in high school.

That kind of progress is proof that we’re doing it right. It’s a good test for any audiophile. If you are actively and seriously pursuing this hobby, perhaps as many as nine out of ten non-audiophile pressings in your collection should sound better with each passing year or two or three.

As your stereo improves, not to mention your critical listening skills, the shortcomings of some will be revealed, but for the most part, vintage pressings should sound better each time you play them with continual refinements and improvements to your system, electricity, room and cleaning techniques.

Solo and In Combination

Of course it’s easy to argue that finding good sound on an album with two or more members of Crosby, Stills, Nash and Young, in any configuration, has never been easy. It’s the rare copy of either of the first two albums that’s even listenable, and the CSN album from 1977 doesn’t sound nearly as good as any of the first three Crosby/Nash albums (of which this is the second). Which simply means that the “good” sound of our Hot Stamper copies is far better than what most audiophiles own of any of these guys in combination.

Their solo albums are a different story altogether. The first solo albums by David Crosby (1971), Stephen Stills (1970) and Graham Nash (1971) are three of my favorite records of all time; each is a brilliant recording, each is powerfully compelling music (the Nash album especially). Two made our Top 100. It’s puzzling to contemplate just how well recorded each of their first solo albums are considering their less-than-stellar group recording efforts. Too many cooks spoiling the broth might make a good guess, but at this point it’s no more than speculation and mostly a waste of time. With so many records to play, we find we do better when we confine ourselves to the realities of the vinyl in front of us.

What We’re Listening For on Wind on the Water

Low Down Payment
Cowboy of Dreams
Homeward Through the Haze
Fieldworker
To the Last Whale (Medley)
a. Critical Mass
b. Wind on the Water

Wind on the Water’s virtues are apparent with the first song, the warm and pensive single “Carry Me.” “Homeward Through the Haze,” “Low Down Payment,” and “Naked in the Rain” are gems that all but sum up their complicated harmonic and melodic style. Besides Crosby & Nash being on their game, the studio players here are impeccable. Lovers of ’70s pop/rock will love to hear players like Danny Kortchmar and David Lindley effortlessly doing their identifiable riffs. James Taylor, Carole King, and Jackson Browne also showed up for these sessions, but do not intrude or overshadow Crosby & Nash… Wind on the Water has an instant classic, lived-in sound and is a definite must-have.