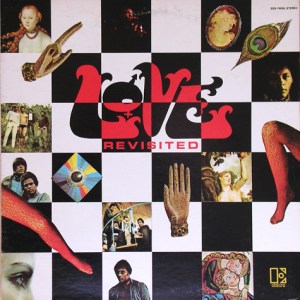 This is a very old review. This album was made from dub tapes and has some of that sound, but in its defense we can say that it was very well mastered from those tapes and is worth picking up for the casual fan of the band.

Two incredible Triple Plus (A+++) sides! We had a chance to shootout a handful of copies recently and didn’t hear any other copies that could compete with this Elektra Original Pressing. We are HUGE fans of Love and this copy will show you why. Both sides are lively and full-bodied and the bottom end is KILLER throughout. In short, it’s EXACTLY the sound you want for this music. Give it a chance and you’ll hear for yourself!

Compared to some other copies, this one had more impact, more power and more energy. The vocals are full-bodied and rich with excellent presence. Most copies we heard were pretty blurry down low, but you can actually make sense of the bass on this one.

My Little Red Book
Softly To Me
Hey Joe
Signed D.C
7 And 7 Is
Orange Skies
Your Mind And We Belong Together
She Comes In Colors

As creative as this group was, Love was never such a strong creator of individual albums. Each record by this band that came out had brilliant songs such as the unforgettable “Seven & Seven Is” as well as second-rate filler including one endless harmonica jam. So this is one group that might be better suited to collections such as this one. A listener might find they have all the Love they need, if such a thing was ever possible, by just owning one album such as this.