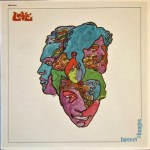 More of the Music of Love

We got hold of a minty original pressing of the first Love album back around 2007, so in preparation for the commentary I pulled one of the Sundazed pressings off the shelf, (Forever Changes, the only one we ever bothered to sell), cracked it open and threw it on the turntable.

The sound to me back then was nothing special, but not bad. Knowing how rare the originals were, we gave it a lukewarm review and put it in the catalog, the single Sundazed Love album that (just barely) made the cut.

Now I wish I hadn’t, because no one should have to suffer through sound that bad. Here’s what I wrote for the shootout:

You’d never know it from those dull Sundazed reissues, but the right pressings of Love albums are full of Tubey Magic! With Bruce Botnick at the controls you can expect a meaty bottom end and BIG rock sound, and this recording really delivers on both counts.

With Sundazed mastering engineers at the controls, you can expect none of the above. No Tubey Magic, no meaty bottom end, no big rock sound.

After the shootout, I took the two copies we had in stock right down to my local record store and traded them in. I didn’t want them in my house, let alone on my site.

I’m glad that title didn’t sell very well because now I feel I owe a personal apology to anyone who might have bought one from me, thinking they were getting a half-way decent record.