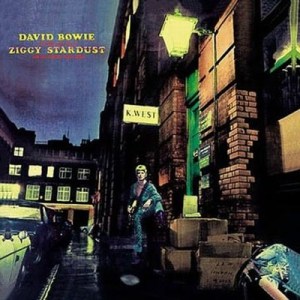 Drop the needle on any song. We guarantee you have never heard that song sound better. The mastering is superb. There’s really no “mastering” to listen for — all you’re really aware of is the music flowing from the speakers, freed from all the limitations that you’ve had to accept over the years.

Unquestionably, this is the pinnacle of Glam Rock. Every track is superb; not a moment is less than stellar from beginning to end.

Is it Bowie’s Masterpiece?

Absolutely. No other Bowie record ranks higher in my book.

Is it amazingly well recorded?

You better believe it. This is not just Bowie’s masterpiece; it’s Ken Scott’s as well. For BIG, BOLD, wall to wall, floor to ceiling sound, look no further. The best copies are swimming in rich, sweet TUBEY MAGIC. This is a sound we cannot get enough of here at Better Records.

The guitars may not sound “real,” they way they actually would in real life, but they sure sound grungy and GOOD!

Ranked strictly in terms of Tubey Magic I would have to put this album on our list of Most Tubey Magical Rock Recordings of All Time, right up there with, and in no particular order:

To say that a superb sounding British pressing is not the kind of record that’s easy to come by these days is to state the obvious. If this record is as meaningful for you as it is for me, I think you will quickly appreciate that it’s worth every penny of its price. All you need do is drop the needle at the start of either side. It won’t be long before all questions are answered and all mysteries revealed.

The emotional power of these songs is communicated so completely through this copy that the experience will be like hearing it for the first time.

This is, I hope it goes without saying, one of the greatest rock records of all time, music that belongs in any collection. I’ve been playing this album for 30 years and I can honestly say I’ve never once tired of it.

What We’re Listening For on Ziggy Stardust

Tubey Magical Acoustic Guitar reproduction is superb on the better copies of this recording. Simply phenomenal amounts of Tubey Magic can be heard on every strum, along with richness, body and harmonic coherency that have all but disappeared from modern recordings (and especially from modern remasterings)

The guitars on this record are a true test of stereo reproduction. Many pressings of this album do not get the guitars to sound right. On some they will sound veiled and dull, and on a copy with a bit too much up top, they will have an unfortunate hi-fi-ish sparkle, the kind that Mobile Fidelity was infamous for in the late ’70s and ’80s.

Just listen to those cymbal crashes! Never heard them sound like that.

The piano is recorded superbly; it’s the perfect balance of power and delicacy, not just on this track but throughout the album.

Borrowing heavily from Marc Bolan’s glam rock and the future shock of A Clockwork Orange, David Bowie reached back to the heavy rock of The Man Who Sold the World for The Rise & Fall of Ziggy Stardust and the Spiders from Mars. Constructed as a loose concept album about an androgynous alien rock star named Ziggy Stardust, the story falls apart quickly, yet Bowie’s fractured, paranoid lyrics are evocative of a decadent, decaying future, and the music echoes an apocalyptic, nuclear dread. Fleshing out the off-kilter metallic mix with fatter guitars, genuine pop songs, string sections, keyboards, and a cinematic flourish, Ziggy Stardust is a glitzy array of riffs, hooks, melodrama, and style and the logical culmination of glam. Mick Ronson plays with a maverick flair that invigorates rockers like “Suffragette City,” “Moonage Daydream,” and “Hang Onto Yourself,” while “Lady Stardust,” “Five Years,” and “Rock ‘n’ Roll Suicide” have a grand sense of staged drama previously unheard of in rock & roll. And that self-conscious sense of theater is part of the reason why Ziggy Stardust sounds so foreign. Bowie succeeds not in spite of his pretensions but because of them, and Ziggy Stardust — familiar in structure, but alien in performance — is the first time his vision and execution met in such a grand, sweeping fashion.

From a few years back:

Picked up your SHS of “Ziggy” last week–my daughter is 13 and starting to get into Mick Ronson, and I got this to show her what I think is his best work, not just on guitar, but in essentially creating the overall sound for the “Ziggy Stardust” album. What I didn’t expect was how fantastic this album sounds. I’ve had other copies and they sound like I’m wearing a blanket over my head.

Alongside my HS copy of “Freak Out” (first record I ever bought from you guys, I think), this has to be the most dramatic improvement over a typical recording I’ve ever heard! Records like this justify Better Records in spades–wow!!

More Albums with One Set of Stampers that Consistently Win Shootouts