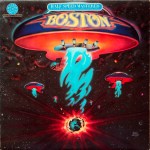 Lack of weight down below, or as we like to call it, whomp factor*, is the main reason half-speed mastered records are so consistently bad. (If not bad, certainly wrong.)

You can be sure that Boston would not have wanted, nor would they have been willing to accept, the kind of anemic sound that the half speed delivers.

The CBS is cut clean from a good tape, so it easily beats the bad domestic pressings, of which there are many. But it can’t rock. What good is a Boston record that doesn’t rock? It’s a contradiction in terms; the band, as well as their debut album, have no other reason to exist.

Here’s what we used to say about the record:

This is the best sounding version of this music that I know of. A Better Records recommended pressing!

Which means it’s another classic case of Live and Learn.

*It’s the WEIGHT and POWER you sense happening down below that translates into whomp factor.

This is the frequency area that screens and small dynamic drivers have the most trouble with. You need to be able to move lots of air under, say, 200 cycles to give the music a sense of real power down below.

Few systems I’ve run into over the last thirty years can really pull it off.