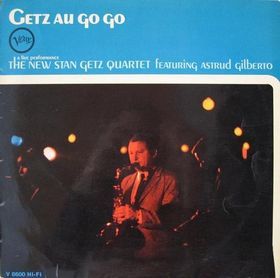 What really sets these performances apart is the relaxed quality of the playing. He seems to be almost nonchalant, but it’s not a bored or disinterested sound he’s making. It’s more of a man completely comfortable in this live setting, surrounded by like-minded musicians, all communicating the same vibe. Perhaps they all got hold of some really good grass that day. That’s the feeling one gets from their playing. As one is listening, there’s a certain euphoria that seems to be part of the music. This is definitely one of those albums to get lost in.

I also use this as a test disc because the third track on side 2, The Telephone Song, has a breathy vocal by Astrud and then Getz’s saxophone solo follows. If those two elements in the recording are in balance, your system is working, tonally anyway.

Of course, you would never know this is a good recording by playing the average domestic copy. This Hot Stamper LP is one of the few pressings that can show you that such a wonderful smoky night club (to quote Bryan Ferry) jazz LP really can have Demo Disc sound.

… this recording hails from the venerable Greenwich Village venue, the Café Au Go Go, in mid-August of 1964 — two months after “Girl From Ipanema” became a Top Five pop single. However, the focus of Getz Au Go Go steers away from the Brazilian flavored fare, bringing Astrud Gilberto into the realm of a decidedly more North American style.

That said, there are a few Antonio Carlos Jobim compositions — “Corcovado (Quiet Nights of Quiet Stars)” and “One Note Samba” — both of which would be considered as jazz standards in years to follow — as well as the lesser-circulated “Eu E Voce.”

Getz and crew gather behind Richard Rodgers and Oscar Hammerstein’s “It Might as Well Be Spring,” and the scintillating instrumental “Summertime,” from Porgy & Bess. Other equally engaging cuts include affective vocal readings of “Only Trust Your Heart,” and the diminutive, yet catchy “Telephone Song.”

There is also some great interaction between Getz and Burton on “Here’s That Rainy Day.” Getz Au Go Go is highly recommended for all dimensions of jazz enthusiasts.

One further point needs to be made: most of the time these very special pressings just plain rock harder. When you hear a copy do what this copy can, it’s an entirely different – and dare I say unforgettable — listening experienc