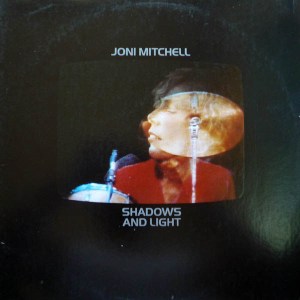 FOUR INCREDIBLE SIDES! We had a huge shootout for this famous double album and this copy blew our minds with a pair each of White Hot and Super Hot sides and quiet vinyl throughout. In the high-stakes game of Better Records Double Album Poker, that’s a full house, my man! Sides one and three earned the A+++ grades while sides two and four were close behind at A++. This one gives you the kind of YOU ARE THERE immediacy and transparency that put you front and center for a late ’70s jazzy Joni Mitchell show. Not too many copies will do that!

If you’re a fan of Joni’s more experimental work from the mid to late ’70s, this album is a must-own. She takes a top-notch crew of musicians including Pat Metheny, Jaco Pastorious and Michael Brecker through a set including many of her best album tracks from the era.

Sides one and three were absolutely top-notch, earning the top grade of A+++. The sound is full-bodied, lively and very DYNAMIC. On so many copies the sax sounds thin and hard, but on a Hot Stamper like this one you get fuller, smoother sound for the instrument. Joni’s voice is breathy and present with real texture, and the three-dimensional imaging gives the music a real sense of SPACE — just like you’d get at a concert. This helps convey the intimacy of the songs and the performances, and isn’t that what we audiophiles got in this crazy hobby for in the first place?

Sides two and four (A++) are nearly as wonderful and much, much better than average. The veiling and congestion of the typical pressing are gone, replaced by real transparency and openness. The vocals sound great and the instruments sound balanced and natural. Listen to how good the percussion sounds on the second side!

Good luck finding another copy of this album that sounds this good and plays this quietly on all four sides! It was a huge project to clean and play so many pressings of this double LP, and I wouldn’t expect that we’ll get around to this shootout again any time too soon. If you’re a fan of Joni and particularly of her work from this era, you don’t want to miss out on this one!

Two of our favorites, Andy Johns and Henry Lewy.

Why Do Fools Fall in Love?
Shadows and Light
God Must Be a Boogie Man
Woodstock

As expected, she assembles a group of all-star musicians including Pat Metheny (guitar), Jaco Pastorius (bass), Lyle Mays (keyboards), and Michael Brecker (saxophone) that give these compositions more energy than on the studio recordings. The musicians are given room to jam, and they sound terrific on up-tempo songs such as “Coyote” and “In France They Kiss on Main Street.”