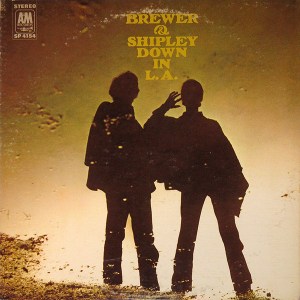 One of the BEST copies we’ve played in many years, close to five I would guess. Brewer and Shipley’s first and only release for A&M has long been a Desert Island disc in my world. I consider it one of the top debuts of all time, although it’s doubtful many will agree with me about that since I have yet to meet anyone who has ever even heard of this album, let alone felt as passionate as I do about it.

To me this is a classic of Hippie Folk Rock, along the lines of The Grateful Dead circa American Beauty, surely a touchstone for the genre. It’s overflowing with carefully-crafted (B and S apparently were obsessive perfectionists in the studio) inspired material and beautifully harmonized voices backed by (mostly) acoustic guitars. The Beatles pulled it off masterfully on Help and Rubber Soul.

All three are built on the same folk pop sensibilities. Tarkio, album number three, is clearly the duo’s masterpiece, but this record comes next in my book, followed by Weeds, their second album and first for Kama Sutra. After Tarkio it’s all downhill.

A++ to A+++, so RICH and TUBEY! Smooth sweet analog sound, with clarity and freedom from smear that make it the best of both worlds. Natural, musical, big, wide — this side was hard to fault. A little more top end extension would have earned it the final half plus to become White Hot.

A+, good, but some of the problems we discuss are clearly evident here. It’s open, spacious and mostly natural, with good bass, but the midrange can get harsh in places, and for that we took off lots of points.

The session musicians who play on this record display a level of musicianship which is sorely lacking from many recordings of the era (except of course for the albums backed by The Wrecking Crew, some of whom play here). Jim Gordon or Hal Blaine on drums play so well you can listen to this album all the way through just to hear how the drumming contributes to the feel and energy of each track.

The problem here is the sound. The recording has some of that tinny ’60s pop production sound — too much upper midrange, not enough lower midrange and a slightly aggressive quality when things get loud. Still, it’s quite a bit better than recordings by, say, The Byrds or Jefferson Airplane from the era, and I have no trouble playing and enjoying those records, so…

I can also tell you that if you have a modest system this record is just going to sound like crap. It sounded like crap for years in my system, even when I thought I had a good one. Vinyl playback has come a long way in the last five or ten years and if you’ve participated in some of the revolutionary changes that I talk about elsewhere on the site, you should hear some pretty respectable sound. Otherwise, I would pass.

On the Difficulty of Reproduction scale, this record scores fairly high. You need lots of tubey magic and freedom from distortion, the kind of sound I rarely hear on any but the most heavily tweaked systems. The kind of systems that guys like me have been slaving over for thirty years. If you’re a Weekend Warrior when it comes to stereo, this is not the record for you.

The drumming on this first track is out of this world — it relentlessly propels this track forward, and you can thank top studio drummers for bringing this kind of energy to the song. Also the fuzzed out guitar that comes in toward the end is pure ’60s pop, exactly the kind of thing we love.

She Thinks She’s A Woman

I love the studio chatter at the opening of this song. The transparency should be striking. When the vocals come in they should be smooth and sweet, better than the first track by a wide margin. And I love this song — it’s one of the strongest on the album.

Another one of the better sounding songs. This one has exceptionally nice bass.

This track tends to sound thin and midrangy on even the best copies.

I Can’t See Her

Another one of the best sounding songs. The blend of the voices is perfection on this track.

A personal favorite. This may be the best track on the album. It’s a perfect example of what folk rock should be.

An Incredible State Of Affairs
Keeper Of The Keys
Love, Love
Dreamin’ In The Shade
Mass For M’Lady

This song has an organ in the arrangement, and it’s the last track on the side, and that means trouble — there’s going to be inner groove distortion, because they certainly would have a hard time cutting that kind of bass into the inner grooves in those days, and turntables had an equally hard time playing those grooves.

Brewer & Shipley’s first album was gentle late-’60s folk-rock with touches of pop and country, with Jim Messina and Leon Russell among the session support… Of all the many folkies to make a transition to electric folk-rock in the 1960s, Brewer & Shipley retained more of the wholesome, strident qualities of early-’60s folk revival harmonizing than almost anyone. 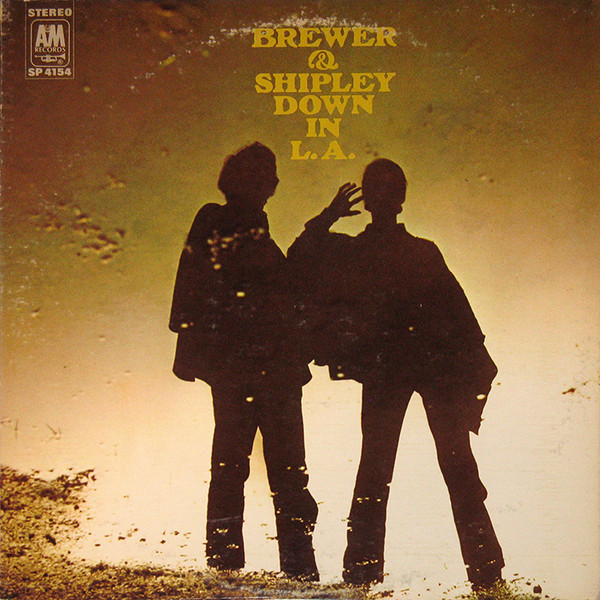