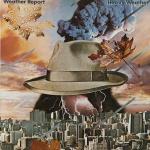 More of the Music of Weather Report

The Track Commentary below has lots of What To Listen For advice to help you evaluate any copies you may have.

Not an easy track to get right; there’s so much upper midrange and high frequency information to deal with. If the synthesizers and horns are too much, the effect is exciting but won’t wear well. Too much 6k is the problem on most copies, along with not enough above 10. That is a deadly combination.

A Remark You Made

Such an original composition. This is the band at their unconventional, non-commercial best.

A Key Track for side two — the drumming and the yelling should sound really alive and powerful, almost shocking. Also, as this is a live performance, the applause is rich and tonally correct on the best pressings, bright, edgy and gritty on lesser ones.

The heart of side two is right here. This track has deep synthesizer bass, lots of airy percussion, with Shorter’s saxophone solidly planted in the mix, all surrounded by tons of ambience. When I listen to a track like this, I picture myself at the mixing console, trying to decide whether all the elements are in balance. That’s the ultimate test — does everything sound balanced and correct. Is everything working together? Or do some instruments or elements of the recording call attention to themselves unnaturally?

The best copies are balanced. All the elements of the recording work together, just as all the members of the band work together. With a balanced copy you find yourself enjoying the music, not listening to the sound.

It should be noted that on the best copies — the copies with the most extended top end — there will be places on this song that may sound bright. Shorter’s sax can be a bit much in places as well. But there is no alternative, no cure, because the copies with less top end cause the percussion to sound muted, and the quality of the percussion on this album is critical to both the music and the sound.

Pretty much the same story applies. This song lives and dies by its driving percussion. Also, the cymbals have a lovely shimmer on the best copies. Most of the time they sound dull and smeary, and that ruins everything.

Weather Report’s biggest-selling album is that ideal thing, a popular and artistic success — and for the same reasons. For one thing, Joe Zawinul revealed an unexpectedly potent commercial streak for the first time since his Cannonball Adderley days, contributing what has become a perennial hit, “Birdland.” Indeed, “Birdland” is a remarkable bit of record-making, a unified, ever-developing piece of music that evokes, without in any way imitating, a joyous evening on 52nd St. with a big band.

The other factor is the full emergence of Jaco Pastorius as a co-leader; his dancing, staccato bass lifting itself out of the bass range as a third melodic voice, completely dominating his own ingenious “Teen Town” (where he also plays drums!). By now, Zawinul has become WR’s de facto commander in the studio; his colorful synthesizers dictate the textures, his conceptions are carefully planned, with little of the freewheeling improvisation of only five years before. Wayne Shorter’s saxophones are now reticent, if always eloquent, beams of light in Zawinul’s general scheme while Alex Acuña shifts ably over to the drums and Manolo Badrena handles the percussion. Released just as the jazz-rock movement began to run out of steam, this landmark album proved that there was plenty of creative life left in the idiom.