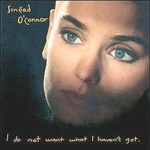 More of the Music of Sinead O’Connor

Presenting another entry in our extensive Listening in Depth series with advice on what to listen for as you critically evaluate your copy of I Do Not Want What I Haven’t Got.

This is widely considered one of the best albums of the ’90s, a brilliant and unique piece of work. I positively love this album. The emotion is every bit as naked and compelling as that found on Joni’s Blue, and I do not say that lightly. I know the power of Blue, and this album has that kind of power. This is some heavy heavy stuff. Hearing it sound right is a thrill I won’t soon forget.

Feel So Different
I Am Stretched on Your Grave

This track has some of the wildest instrumentation I’ve ever heard. The rhythm is provided by a looped sample of the beat from James Brown’s “Funky Drummer”, with Sinead’s reverb-laden vocals carrying the droning melody. At the apex of the track, some crazy-ass violins come in, making for a haunting celtic/hip-hop hybrid. I think there’s even some Persian in there. This one just knocks me out every time I hear it.

The average bad sounding pressing of side one just plain ruins this track. The sound will lack extension on the top and reek of blubbery bass. The hot copies have solid low end, lots of air around the vocals, and texture on the violins. The good copies let the song work its magic; the bad ones don’t.

This cut showcases some of the real emotional depth and weight that can be found on this album. Her naked vocal demands the ultimate in transparency. Without it you have nothing. Veiled copies are positively unlistenable, and there are plenty of those out there.

The undeniable hit single of Sinead’s career, written by Prince don’t you know. Her vocal performance here is truly awe-inspiring. Our hot copies allow you to appreciate how dynamically she sings. Watch out: the average version becomes hard and biting when she starts pushing her vocal. It totally crushes the emotion in her voice and breaks the spell.

The album plays like a tour de force in its demonstration of everything O’Connor can do: dramatic orchestral ballads, intimate confessionals, catchy pop/rock, driving guitar rock, and protest folk, not to mention the nearly six-minute a cappella title track.

What’s consistent throughout is the frighteningly strong emotion O’Connor brings to bear on the material, while remaining sensitive to each piece’s individual demands. Aside from being a brilliant album in its own right, I Do Not Want What I Haven’t Got foreshadowed the rise of deeply introspective female singer/songwriters like Tori Amos and Sarah McLachlan, who were more traditionally feminine and connected with a wider audience. Which takes nothing away from anyone; if anything, it’s evidence that, when on top of her game, O’Connor was a singular talent.