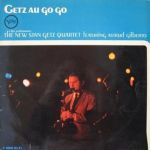 This album is useful as a test disc. The third track on side 2, The Telephone Song, has a breathy vocal by Astrud, soon followed by Getz’s saxophone solo. If those two elements in the recording are in balance, your system is working, tonally anyway.

This is one of Rudy Van Gelder’s greatest recordings. I think it’s as good as it is because he was out of his studio (mostly) and had to revert to Recording 101, where you set up some good mics and get the thing on tape as correctly as you can. There’s hardly a trace of his normal compression and bad EQ on this album. (The sax is problematical in places but most everyone else is right on the money.)

I’ve gotten more enjoyment out of this Getz album than any other, including those that are much more famous. This one is (mostly) live in a nightclub and it immediately puts you in the right mood to hear this kind of jazz.

What really sets these performances apart is the relaxed quality of the playing. He seems to be almost nonchalant, but it’s not a bored or disinterested sound he’s making. It’s more of a man completely comfortable in this live setting, surrounded by like-minded musicians, all communicating the same vibe. Perhaps they all got hold of some really good grass that day; that’s the feeling one gets from their playing. There’s a certain euphoria that seems to be part of the music. This is definitely one of those albums to get lost in.