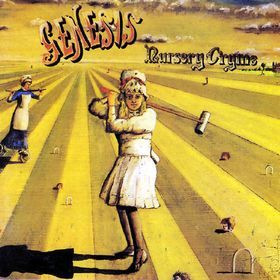 This QUIET Super Hot Stamper is actually on the Charisma Blue label, not the original, but it gave our best Pink label copies a run for their money, with superb bass, real rock energy and lovely midrange transparency. For fans of the Classic Lineup involving Phil Collins and Steve Hackett — this being the first album with them on board — side one of this copy will show you a Nursery Cryme the likes of which you have never heard. (If you own the Classic Heavy Vinyl pressing you are really in for a shock. That pressing is a smeary lifeless mess next to this LP.)

Side two was nearly as good, earning a grade of A+ to A++. It had good energy but lacked the rock weight of the best we played, along with a slight lack of transparency compared to our shootout winner. Still, worlds better than the average import copy, and don’t get me started on the domestic LPs — they really suck. (Surprisingly this is not the case on every Genesis title, just most of them.)

Seven Stones
Harold the Barrel
Harlequin
The Fountain of Salmacis

If Genesis truly established themselves as progressive rockers on Trespass, Nursery Cryme is where their signature persona was unveiled: true English eccentrics, one part Lewis Carroll and one part Syd Barrett, creating a fanciful world that emphasized the band’s instrumental prowess as much as Peter Gabriel’s theatricality… these are the songs that showed what Genesis could do, and they still stand as pinnacles of what the band could achieve.