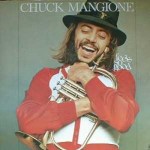 More of the Music of Chuck Mangione

We did a shootout for this album in 2012 and had a hard time finding much energy in the music. That is, until we stumbled upon a few good copies, which showed us just how well recorded the album was and how enjoyable the music could be on the right pressing.

It’s shocking just how lifeless and pointless Feels So Good can sound on some copies.

After only a few minutes the band seems to be having a hard time staying awake.

But the same performance is captured on every pressing, so how can the band sound so inspired here and so uninspired elsewhere?

It’s one of the mysteries of recorded media, one which still takes us by surprise on a regular basis, every week in fact.

This idea that most pressings do a poor job of communicating the music still has not seeped into the consciousness of the audiophile public, but we’re diligently working to change that, one Hot Stamper at a time.

The copies that are present, clear, open, transparent and energetic, with a solid rhythmic line driving the music, are a hundred times more enjoyable than the typical pressing that can be found practically unplayed (gee, I wonder why?) sitting in most record collections.

By the way, if you know Feels So Good only through the radio, you may be surprised to find that it’s close to ten minutes long, not the three minutes you’re familiar with. The band stretches out quite a bit and the solos are fairly inventive, as AMG noted.

This very side two has that problem to a fair degree; it’s a bit too murky and veiled to be as much fun as side one. But so few copies were any good at all that it still earned an A+ grade. If you turn it up it helps it quite a bit. Still, it lack extension high and low compared to this side one.

A++ to A+++, lively, rich, sweet and clear, with tons of space, this one very nearly won our shootout. You can follow the bass clearly, and unlike most copies you can really “see” the drummer. The effect is more energy, more spirited music, and a more rewarding listening experience.

A+ as noted above.

Feels So Good
Maui-Waui
Theme from “Side Street”

Due to the title cut, this was a huge seller when it originally came out… this set from flügelhornist Chuck Mangione (which helped give guitarist Grant Geissman some fame) is actually stronger from the jazz standpoint than Mangione’s subsequent dates. The leader has some good solos, as does Geissman and saxophonist Chris Vadala, and the quintet’s ensembles are generally both sparse and attractive. Pity that in ways this was Chuck Mangione’s last worthwhile release to date; success did stunt his artistic growth.