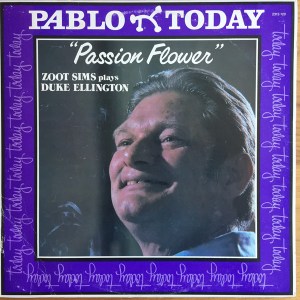 One of the all time great Pablo sleepers. Why is no one else writing about records like these? The music is wonderful and the sound is top drawer on the best copies. If you’ve tried and failed with other Pablo Zoot Sims records, fear not: this title is one of his best, musically and sonically.

If you want to hear the Duke’s music swing in top sound, get this album.

This is a big group, probably at least a dozen pieces at any given time, and all that energy is captured on the best copies with tremendous engineering skill. The lively arrangements are by none other than Benny Carter, a man who knows his jazz. His career started in the ’20s(!) and lasted into this century if you can believe it. I consider myself fortunate to have seen him play locally when he was more than 90 years old. He stlll had it, kind of.

A++, big, clear and very present, with far more space and energy than most. Not thick or fat and very lively.

A+++, with maximum sonic information like no other. More clarity and space around the instruments, with an especially breathy sax, this piece of vinyl captured more of the sound of the band than any other we played. Dynamic and natural, this is precisely the kind of sound we were looking for. No other side two could touch it.

Thickness and fatness were common problems with Passion Flower — many copies were overly rich and somewhat opaque. It’s not necessarily a bad sound, but it becomes more and more irritating as you find yourself struggling to hear into the musical space of the studio.

Smear is a problem too; many copies were lacking the transient information of the best.

Engineered by Bob Simpson at the RCA recording studios in NY, and Dennis Sands in Hollywood, these guys know a lot more about recording a large jazz ensemble than a couple of audiophiles who owned a stereo store could ever hope to learn. Experience is a great teacher in this regard.

Benny Carter provided the arrangements for the 16-piece band that accompanies the great tenor Zoot Sims on this set of Duke Ellington songs. The album is highlighted by “In a Mellow Tone,” “I Got It Bad,” “Passion Flower” and “Bojangles,” but all nine selections are enjoyable and Sims is in top form.

In fact it can easily be argued that Zoot Sims never made an indifferent or unswinging album, so it is not much of a surprise that this date is quite successful and should greatly appeal to straightahead jazz fans.