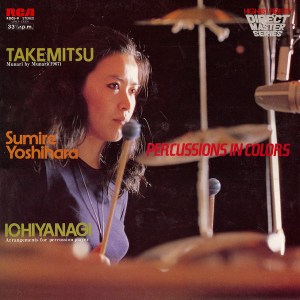 Rare 1978 audiophile limited edition Japanese lp with Sumire Yoshihara on percussion performing experimental works. The Ichiyanagi work has a unique graphical score and allows the performer to select different classes of percussion. Takemitsu’s piece is based on a work of art in the form of a book made for the composer by Italian artist Bruno Munari. Takemitsu’s score consists of this book and an accompanying set of musical instructions on how to interpret its abstract collages and designs. Includes extensive notes inside the gatefold cover.