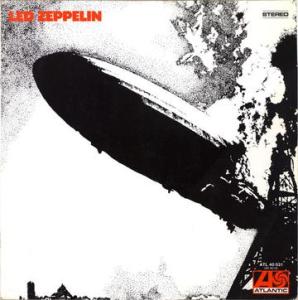 YOU WON’T BELIEVE HOW HARD THIS ZEP I ROCKS! It’s exceedingly tough to find great copies of this album, which is why you’ve never seen a Hot Stamper copy on the site before. We went through more than two dozen copies looking for The Real Sound, and this copy’s got it big time… ON BOTH SIDES!

For the real Led Zep magic, you just can’t do much better than the debut — and here’s a copy that really shows you why. From the opening chords of Good Times Bad Times to the wild ending of How Many More Times, this copy will have you rockin’ out!

Side one has got THE BIG ZEP SOUND. Right from the start, we noticed how clean the cymbals sounded and how well-defined the bass was, after hearing way too many copies with smeared cymbals and blubbery bass. When you have a tight, punchy copy like this one, Good Times Bad Times does what it is supposed to do — it REALLY ROCKS! It’s just a bit bright, and there’s a little spit to the vocals, but with this much life, it’s light years aheads of the typically dull, dead, boring copy. The drum sound is PERFECTION.

Drop the needle on Babe I’m Gonna Leave You to hear how amazing Robert Plant’s voice sounds. It’s breathy and full-bodied with unbelievable presence. The overall sound is warm, rich, sweet, and very analog, with tons of energy. Dazed and Confused sounds JUST RIGHT — you’re gonna flip out over all the ambience! We rate side one A++ — incredible!

As amazing as side one is, side two is EVEN BETTER — it’s got MASTER TAPE SOUND with amazing tubey magic. What do you get on an A+++ Zep I side? Uncanny presence, clearer harmonics and transients, a fully extended top end, astonishing clarity and transparency and a WHOLE LOTTA BASS. You get all the texture, detail, and ambience that are missing from the average copy. Communication Breakdown sounds superb — the sound of Jimmy Page’s guitar during the solo is Right On The Money! You won’t find a better side two for this album, and we’ve rated it accordingly, A+++ all the way.

Imports — As Always, A Mixed Bag

I have numerous early pressings from England and Germany and, of course, no two of them sound the same. My A1/B1 British Plum and Orange label turned out to be very good, but not in a league with the very best. Other British originals didn’t even make it past the first round. It just goes to show (again) that you can’t figure out too much about a record by looking at the label — you’ve got to play ’em to know how they sound.

Like any Zeppelin album, this music absolutely requires BIG BASS. Yet so many copies are sorely lacking in that area, suffering from a lack of weight in the bottom end. When some of the deep bass is missing, the tonal balance shifts upwards and the sound can become upper midrangy and bright. That was my first impression of side one, but I realized the bass was at fault, not the highs. When you get a copy without the kind of big, meaty bottom end a track like Dazed and Confused demands, you’ll be left cold — just as we were from all the weak copies we heard this time around.

Beyond that, most copies of this album we come across are thrashed beyond belief. It’s hard enough to find a copy that’s quiet enough to sell, let alone one with amazing sound. It’s why you almost never see any copy of this album on our site — Hot Stamper or not. This copy has slightly noisy edges on both sides, but quiets down quickly to play between Mint Minus and Mint Minus Minus.

Yup, and we still do — albeit with reservations. The Classic actually rocks, something a majority of pressings we’ve played just can’t do. If you don’t have the time to acquire a couple dozen domestic and import copies, and you don’t have the bread for a pricey Better Records Hot Stamper, the Classic is probably your best bet. But on a high-resolution front-end, you’ll start to notice some problems with Bernie’s version. For one thing, the vocals just aren’t as natural as they are on a Hot Stamper copy. A major highlight of this album is how amazing Robert Plant’s voice was before years of touring and, no doubt, partying took their toll. If you want to hear that voice at its best, there’s just no substitute for a Hot Stamper Zep I.

Here’s what I said about the Classic a while back:

This version is a little (deep) bass shy — 2 or 3 db at 40 helps a lot — but it’s cleaner and more dynamic than any other copy I have heard. Things get loud on this version that never got loud before. And that is, to quote one of my competitors, awesome!

Maybe Bernie trimmed the bass because it’s distorted, which would be a mistake, as the distortion is on the tape and rolling off the bottom end solves nothing. Zep II is the same way, maybe even more so.

Since 90% of all the audiophile systems I’ve ever heard were bass shy this may not be as obvious as it should be. But Led Zeppelin without deep punchy bass emasculates the music in such a fundamental way that it’s hard to imagine this album could have much effect on its audience without it. It’s called head banging music for a reason. Like Wayne, Garth and their buddies driving down the road in Wayne’s World, when it’s really rocking you have an uncontrollable desire to bang your head up and down to the beat, and you need bass to make it rock.