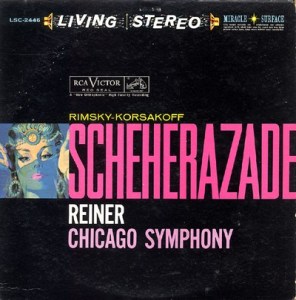 White Hot on Side One! Big brass, so full-bodied and dynamic. The solo violin is present and so real you will not believe it. The highest resolution we have ever heard for this performance. Hard To Fault (HTF).

This copy is huge in every dimension, just as all the best ones always are, with maximum amounts of height, width, and depth. The transparency is also superb — you really hear into this one in the way that only the best Living Stereos (and other golden age recordings) will allow.

Side two is A++, a little more tubey and less clear than side one, but full, a quality that is essential to the sound of the best pressings. Very musical and enjoyable, with minor faults that are easily overlooked.

This was a monster shootout we had been planning for more than two years. On hand were quite a few copies of the Reiner on RCA; the Ansermet on London (CS 6212, his second stereo recording, from 1961, not the earlier and noticeably poorer sounding recording he did in 1959); the Ormandy on Columbia, and a few others we felt had potential.

The only recordings that held up all the way through — the fourth movement being THE ball-breaker of all time, for both the engineers and musicians — were those by Reiner and Ansermet. This was disappointing considering how much time and money we spent finding, cleaning and playing those ten or so other pressings.

The somewhat shocking news is just how awful sounding most Shaded Dog copies are. Even the ones with the “right” stampers are often far from what they should be.

Of course, as is usually the case, hearing the phenomenally good pressings made all the time and effort we put into the shootout worthwhile. Our top Reiner side two was just mindblowing. Unfortunately the side one it was mated to was quite poor, and so for now it sets on a shelf waiting for a mate.

The Most Exciting Fourth Ever

The fourth movement on this famous RCA recording is positively breathtaking. You will not find a more exciting performance on the face of this earth, that’s for sure. Some criticize Reiner for a lack of lyricism in the quieter passages, and I have heard performances of this work that are somewhat better in that respect. But this is still overall the best performance I know of. The Chicago Symphony was on fire that day. The precision and energy of their playing is uncanny. Go back and listen to other orchestras from the ’50s and ’60s play this piece and you will hear a fair amount of slop — the technical skills required for this work were simply not as common back in those days. Modern orchestras are much more proficient in this respect.

Unfortunately the recording engineers have been letting us classical music lovers down for decades, so the better playing is for naught if good sound is important to you.

Of course, the fact that a recording is on the TAS List doesn’t guarantee that the pressing you buy will have great sound, but Better Records does precisely that. If you don’t think a record sounds as good as we’ve described it, we’ll always happily take that record back and refund your money.

The Young Prince and the Young Princess
Festival in Bagdad; The Sea; The Ship Goes to Pieces on a Rock Surmounted by a Bronze Warrior

Scheherazade, completed in the summer of 1888, was given its premiere in St. Petersburg on November 3 of that year, with the composer conducting.

In the late 1880s, when Rimsky-Korsakov composed Scheherazade, enormous changes were taking place in the character of concert music. More than fifty years earlier, in the Symphonie Fantastique, Hector Berlioz had provided a stunning demonstration of how the resources of the modern orchestra could be used to provide previously unimagined color content to enhance the descriptive power of dramatic music. In his second visit to Russia, toward the end of 1867, Berlioz provided an irresistible stimulus for Russian composers, who responded with particular enthusiasm—and thus began a productive Franco-Russian interpollination which, we might say, reached its symbolic peak in Maurice Ravel’s orchestral setting of Pictures at an Exhibition, which the Russian conductor Serge Koussevitzky commissioned and introduced in Paris in 1922.

The year in which Rimsky completed Scheherazade was the very year in which the young Richard Strauss completed the first of his great tone poems, Don Juan, and Gustav Mahler completed the score of his First Symphony. Strauss and Mahler, of course, knew a thing or two about exploiting the orchestra to paint a picture of tell a story, and Strauss even brought out his own edition of Berlioz’s book on orchestration, but the Russians and the French were drawn to two particular sources of tales to be told that provided very conspicuous opportunities for new degrees of exploration in the world of orchestral color: fairy tales and legends in general, and more particularly tales from exotic cultures, distant in both time and place.

Like Berlioz, Rimsky wrote his own book on orchestration (in which he understandably used numerous examples from the present work) and also published his memoirs. In the latter, which he called My Musical Life, he noted that after reading the Arabian Nights’ Entertainments he conceived “an orchestral suite in four movements, closely knit by the community of its themes and motives, yet representing, as it were, a kaleidoscope of fairy-tale images and designs of Oriental character.” (Let it be noted that the term “Oriental” has never meant to Europeans simply and only the Far East, as it does to most Americans, but quite specifically the lands of the Arabian Nights.)

By way of explaining the title Scheherazade, he wrote a brief introduction to be printed in the score and in the program for the work’s premiere:

The Sultan Schariar, convinced that all women are false and faithless, vowed to put to death each of his wives after the first nuptial night. But the Sultana Scheherazade saved her life by entertaining her lord with fascinating tales, told seriatim, for a thousand and one nights. The Sultan, consumed with curiosity, postponed from day to day the execution of his wife, and finally repudiated his bloody vow entirely.

Many wondrous things were related to the Sultan Schariar by the Sultana Scheherazade. For her tales she took verses from the poets and words from the songs of the people, and intermixed the former with the latter.

Beyond that, Rimsky-Korsakov provided no specific “program,” and did not even affix titles to the respective movements. The titles commonly used now were suggested to him by his colleague Anatoly Liadov; Rimsky accepted them at first, but later eliminated them from the score. In My Musical Life he wrote,

I meant these hints to direct but slightly the listener’s fancy on the path which my own fancy had traveled, and to leave more minute and particular conceptions to the will and mood of the individual listener. . . . All I had desired was that the listener, if he liked my piece as symphonic music, should carry away the impression that it is beyond doubt an Oriental narrative of some numerous and varied fairy-tale wonders.

The titles have adhered, though, and audiences welcome them as guideposts to the particular stories recounted in the music. The first movement, accordingly, is known as THE SEA AND SINBAD’S SHIP. The commanding theme that opens the work is the voice of the Sultan demanding his entertainment, and the sinuous one from the violin is the voice of Scheherazade herself as she begins her tales. It has been suggested that Rimsky-Korsakov’s background as a naval officer influenced his decision to begin and end his Arabian Nights narrative on the sea.

THE TALE OF THE KALENDER PRINCE comes next. The Kalenders were a particular category of fakir, roving monks who turned up at Eastern courts and bazaars dispensing stories, magic tricks and wit in exchange for a coin or a night’s lodging. The “Kalender Prince” was one of those mendicants who turned out to be a nobleman in disguise. That some images as well as themes travel from ovement to movement in the work is indicated by the composer’s note that a piccolo motif in this episode is “a sort of sketch of Sinbad’s bird, the roc.”

The voluptuous slow movement is a tale of THE YOUNG PRINCE AND THE YOUNG PRINCESS, said to be Prince Kamar al-Zanna and Princess Budur, “created so much alike that they might be taken for twins.”

Several tales are brought together in the finale: THE FESTIVAL AT BAGHDAD; THE SEA; THE SHIP GOES TO PIECES ON A ROCK SURMOUNTED BY A BRONZE WARRIOR. Rimsky had orchestrated parts of Borodin’s opera Prince Igor just before composing Scheherazade, and the flavor of the Polovtsian Dances is felt in his evocation of the Baghdad revels. The character of the Sultan is utterly transformed at the end of the work, from the unyielding sternness with which the sequence began to a warm expansiveness born of the thousand and one nights with his incomparable story-teller.