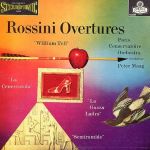 The London and Decca original pressings are the best, right?

Sometimes, but not always. Some of the originals didn’t sound very good to us in recent shootouts.

Bad vinyl, bad mastering, who knows why so many copies sound so thick, dull and veiled?

This Stereo Treasury pressing of Maag’s 1958 recording is shockingly good in many ways. It sure doesn’t sound like a budget reissue. If anything it sounds more original than the originals we played against it! 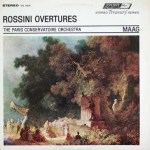 It’s yet another remarkable disc from the Golden Age of Vacuum Tube Recording Technology, with the benefit of mastering by means of the modern cutting equipment of the mid- to late- ’60s. (We are of course here referring to the good modern mastering of 30+ years ago, not the bad modern mastering of today.)

The combination of old and new works wonders on this title, as you will surely hear for yourself on both of these Super Hot or better sides.

Everyone needs a good Rossini Overtures – the music is exciting and fun, not to mention Demonstration Quality on a pressing such as this. The performances by Gamba on London and Reiner on RCA can also be very good, with excellent sound to be sure, but the combination of sound and performance on the best of the Maag-led Londons could not be equaled. (Certainly not by the pressings we had on hand; there may be better out there but we have not been fortunate enough to chance upon them.)

Rich, clear, huge, with powerful brass and weighty tympani, this side was doing what few recordings — of any music — are capable of doing. The deep bass is phenomenal, the overall energy more like the live performance than the typical compressed orchestral recording.

The rich, smooth, Tubey Magical Decca sound is exactly what is called for with this music. As good as our original Londons were, the STS remastering from less than ten years later (1967?) takes the recording to another level.

Every bit as good in the quieter passages. It’s rich and smooth, and the loudest passages play cleaner after a minute or two (as is so often the case).

The rich, textured, rosin-on-the-bow lower strings on this record are to die for. Find me a modern record that sounds like this and I will eat it. And by “modern record” we hasten to include both modern recordings and modern remasterings of older recordings. NO ONE alive today can make a record that sounds even remotely as good as this. To call it a lost art is to understand something that few vinyl-loving audiophiles appear to have grasped since the advent of the Modern Reissue, which is simply this: they can’t begin to compete.

Fortunately for the both of us we are not trying to make a record that sounds the way this one does. We’re just trying to find it, and folks, we found the hell out of this one.

According to the Oxford History of Western Music, “Rossini’s fame surpassed that of any previous composer, and so, for a long time, did the popularity of his works. Audiences took to his music as if to an intoxicating drug – or, to put it more decorously, to champagne, with which Rossini’s bubbly music was constantly compared.”

Rossini took existing operatic genres and forms and perfected them in his own style. Through his own work, as well as through that of his followers and imitators, Rossini’s style dominated Italian opera throughout the first half of the 19th Century.

A characteristic mannerism in Rossini’s orchestral scoring is a long, steady building of sound over an ostinato figure, creating “tempests in teapots by beginning in a whisper and rising to a flashing, glittering storm,”[20] which earned him the nickname of “Signor Crescendo”.

A few of Rossini’s operas remained popular throughout his lifetime and continuously since his death; others were resurrected from semi-obscurity in the last half of the 20th century, during the so-called “Rossini Renaissance”.

Rossini himself correctly predicted that his Barber of Seville would continue to find favor with posterity, telling a friend:

One thing I believe I can assure you: that of my works, the second act of Guglielmo Tell, the third act of Otello, and all of il Barbiere di Siviglia will certainly endure.