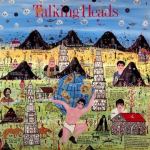 We’re huge fans of Little Creatures here at Better Records and we think when you hear one of our Hot Stamper copies you’ll know exactly what we love about it. Not many records from this era sound as amazingly rich as this one, not in our experience anyway. (As I write this there are four Hot Stamper pressings from 1985 on the site, and one of them is Brothers in Arms, hardly anyone’s idea of audiophile quality sound I venture to say.)

The recording is simply outstanding — punchy, smooth & so ANALOG, with an especially beefy bottom end, the kind a good Big Beat Pop Album record needs. (For a mental reference think Get The Knack or Parallel Lines.)

The best copies boast the kind of tight, punchy, surprisingly deep note-like bass that absolutely makes or breaks the sound on Little Creatures. Without the proper bass foundation this funky beat-crazy Talking Heads album can’t BEGIN to do what it’s trying to do: get your feet tappin’ and your body rockin’ to the music.

The best pressings are amazingly dynamic, with a sweet, often silky top end. The drums are very well recorded throughout — you can really hear the room around that big kit.

On the best copies such as this one David Byrne’s vocals have the presence and breathy texture they need. The overall sound is open, spacious, and sweet, even three-dimensional.

You would never know how good this album can sound by playing the average pressing you might pick up for five bucks at your local used record store. The typical copy of this record is pretty average sounding – smeary, a bit grainy, lacking in richness and weight, with no real top end.

Let’s face it: Every mastering mistake that can be made will be made sooner or later with mass-produced domestic vinyl like this. There’s no getting around some copies just weren’t pressed properly, or the vinyl was bad that day, or who knows what else might have gone wrong.

We try and find the copies with the least number of problems, the copies that sound the most like Master Tapes and the least like Old Records.

This is the Last Great Talking Heads album. The first four and this one give you all the Talking Heads music you’ll ever need. Each of them is brilliant in its own way.

One of the ways this one is especially brilliant from our admittedly skewed point of vies is that it’s the best sounding record the Talking Heads ever made.

Stay up Late
Walk It Down
Television Man
Road to Nowhere

Talking Heads’ most immediately accessible album, Little Creatures eschewed the pattern of recent Heads albums, in which instrumental tracks had been worked up from riffs and grooves, after which David Byrne improvised melodies and lyrics. The songs on Little Creatures, most of which were credited to Byrne alone (with the band credited only with arrangements) sounded like they’d been written as songs. Perhaps as one result, the band had been streamlined, with extra musicians used only for specific effects rather than playing along as an ensemble.

Byrne, who was singing in his natural range for once, frequently was augmented with backup singers. The overall result: ear candy. Little Creatures was a pop album, and an accomplished one, by a band that knew what it was doing.

As I assume you’ve figured out, this return to basics isn’t exactly Talking Heads ’77. What the relatively straight and spare approach signifies is that their expansive ’80s humanism doesn’t necessarily require pluralistic backup or polyrhythmic underpinnings. It affirms that compassionate grown-ups can rock and roll. The music is rich in hidden treasures the way their punk-era stuff never was, and though the lyrics aren’t always crystalline, their mysteries seem more like poetry than obscurantism this time out. Anyway, most of the time their resolute happiness and honest anger are right there, and in “Stay Up Late” they come up with a baby song that surpasses “Willie and the Hand Jive” itself. Grade: A