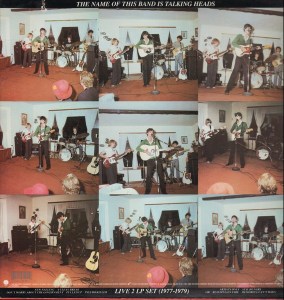 We recently had a big shootout for this live double album and were very impressed with how good some of this material can sound, particularly on the first side which was recorded before the band got huge and started playing bigger venues. A lot of copies we played were too thick and compressed to break through the challenges that live recordings face, but this one really nailed it.

The music is superb — these guys were one of the very best live bands of the era, no doubt. Even though some of the material wasn’t exceptionally well recorded, this copy capably presents the music throughout and lets you hear why the Talking Heads were such a special live act. The typical copy just doesn’t do that.

The sound is lively, incredibly present, rich and full. Byrne’s vocals sound just right and the clarity is superb. When the music is this immediate and three-dimensional, it takes the enjoyment to a whole new level.

The best sides tended to have the same qualities. They were huge, open, clear, transparent, rich, tubey, and natural.

And of course, they rocked, with startling dynamics, massive amounts of bass and a full-bodied midrange. The better the pressing the more the instruments jumped right out of the speakers.

What the best sides have to offer is not hard to hear:

No doubt, there’s more but we hope that should do for now. Playing the record is the only way to hear all of the above, and playing the best pressings against a pile of other copies under rigorously controlled conditions is the only way to find a pressing that sounds as good as this one does.

I Zimbra
Drugs
Houses in Motion
Life During Wartime

The Great Curve
Crosseyed and Painless
Take Me to the River

Although most people probably think the only Talking Heads live release is Stop Making Sense, the fact is that there’s an earlier, better live album called The Name of This Band Is Talking Heads. Originally released in 1982 on LP and cassette, the album chronicles the growth of the band, both stylistically and personnel-wise. The first LP is the original quartet version of the band, recorded between 1977 and 1979, performing excellent versions of tunes (mostly) off 77 and More Songs About Buildings and Food. Also included were the previously unavailable “A Clean Break” and “Love Goes to a Building on Fire,” as well as early versions of “Memories Can’t Wait” and “Air.” The second LP comes from the Remain in Light tour, recorded in 1980 and 1981. In order to present something close to the music on that album, the original quartet lineup was greatly expanded. Added were two percussionists (Steven Stanley, Jose Rossy), two backup singers (Nona Hendryx, Dollette McDonald), Busta Cherry Jones on bass, Bernie Worrell (!) on keys, and a young Adrian Belew on lead guitar. The excitement of this material is palpable, and the muscular band rips into these tunes with more power than the originals in most cases… arguably one of their finest releases.