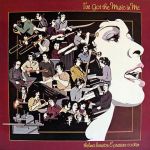 In our last shootout this White Hot Stamper tied for the best side two we have ever heard! In the final round it simply came down to the fact that the other copy was a little more clear, this one is a little richer. They were both so amazing we couldn’t decide which we preferred so we gave them both White Hot Stamper grades.

In our experience this rarely happens. Most of the time one side of one of the records in the shootout will show itself to be the clear winner, doing everything (or almost everything; there is no such thing as a perfect record) right. When you play enough copies, eventually you run into the one that shows you how the music wants to be heard, what kind of sound seems to work for it the best. The two side twos we liked were variations, and fairly subtle ones at that, on a theme — a little richer here, a little clearer there, but both SO GOOD!

Side two fulfills the promise of the direct to disc recording approach in a way that few — very few — direct to disc pressings do. To be honest, most copies of this title were quite good. Few didn’t do most things at least well enough to earn a Hot Stamper grade. This has not been the case with many of the Sheffield pressings we’ve done shootouts for in the past. Often the weaker copies have little going for them. They don’t even sound like Direct Discs!

Bottom line? You got to play ’em, just like any other record. If no two records sound the same, it follows that no two audiophile records sound the same, a fact that became abundantly clear very early on in the listening. Of course not many audiophiles are in a position to shootout eight or ten copies of I’ve Got The Music In Me, and I’m not sure most audiophiles would even want to. Here at Better Records we have a whole system set up to do exactly that, so we waited until we had a pile of them, got them all cleaned up, and off to the races we went.