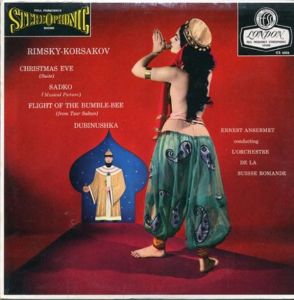 This Blueback original pressing has EXCELLENT Hot Stamper sound on BOTH sides, with both sides earning grades of A+ to A++. The sound is rich and Tubey Magical in the finest tradition of London / Decca.

The Christmas Eve suite takes up the entire first side, with three shorter pieces comprising the second. Rimsky-Korsakov’s exotic orchestrations, much like those found on his wonderful Scheherazade, are pure audiophile ear candy from first note to last.

This side one had top end extension, good presence and clarity, all qualities that are often in short supply on old classical pressings such as these.

We were also impressed with the depth of the soundstage and the textured strings. This copy however was not quite as full-bodied and powerful down low as the best we played.

Even more transparent and high-rez than side one. The texture on the strings and the breathy quality of the woodwinds make this a very special pressing indeed.

The horns are somewhat smeary and can get a bit congested when loud. There is more compression on this side two than there was on the best copy we played, and that means low level detail is superb, but louder parts, such as when the brass comes in, can get problematical. 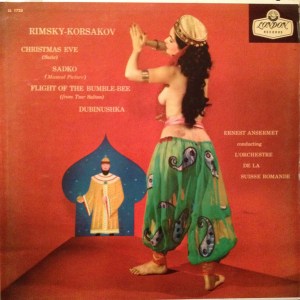 Note how good The Flight of the Bumble Bee sounds here. Compression is helping bring out all the ambience and detail in the recording, and there’s no downside because the orchestra is playing softly, unlike the piece that precedes it. In other words, it’s a classic tradeoff.

Sadko
The Flight of the Bumble Bee