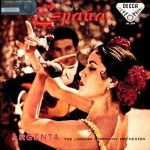 This is a Speakers Corner Decca 180 gram LP reissue of the famous Argenta performance, a recording which can sound positively amazing on the right original London, but only about 2 out of 10 copies actually do sound amazing.

And where in the world are you going to find 10 clean copies of a record that’s 60+ years old?

This pressing gets you most of the way there, on reasonably quiet vinyl, for a lot less money.