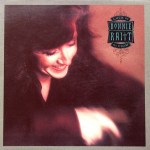 Well folks, it may have taken YEARS but we’ve finally found a Hot Copy — this one rates A++ on side one and A+ to A++ on side two. We think you’ll have a very hard time finding a better sounding pressing of this album no matter what you do, and of course we guarantee it will handily beat the pants off the DCC or your money back.

Side one is excellent — punchy down low, sweet up top and unusually open and transparent. It had more analog qualities than most of the copies we heard, which tended to have that digital / sterile sound that kills so many albums from the era. The energy and presence really kick up the fun factor on this side; we gave it an A++.

Side two is almost as wonderful — super open and transparent with real immediacy. It doesn’t have all the analog richness of side one, but it was a nice step up over most pressings we played. We rated it A+ to A++.

Nick Of Time may be a slightly better album — we won’t press the point — but this is certainly a very good one as well. If you love Bonnie’s music as much as we hope you do, you will no doubt want them both. We don’t imagine we’ll be tracking down too many of these, they’re much more rare than Nick, so if you’re a fan, scoop this one up — we think you’ll be very pleased with the sound this copy gives you.

We wrote a commentary on the DCC pressing of Nick of Time which we have reprinted below.

Mutatis Mutandis, the sonic shortcomings of the DCC Nick of Time, when played against a properly mastered and pressed standard issue LP, are virtually identical to the faults you will hear on the DCC of Luck of the Draw (and DCC records in general).

The no-longer-surprising thing about our Hot Stamper pressings of Nick Of Time is how completely they MURDER the DCC LP. Folks, it’s really no contest. Yes, the DCC is tonally balanced and can sound very good, but it can’t compete with the best original pressings. It’s missing too much of the presence, intimacy, immediacy and transparency that we’ve discovered on the better original pressings.

As is the case with practically every record pressed on Heavy Vinyl over the last twenty years, there is a suffocating loss of ambience throughout, a pronounced sterility to the sound. Modern remastered records just do not BREATHE like the real thing. Good EQ or Bad EQ, they all suffer to one degree or another from a bad case of audio enervation. Where is the life of the music? You can turn up the volume on these remastered LPs all you want but they simply refuse to come to life.

We play albums like this VERY LOUD. I’ve seen Bonnie Raitt live a number of times and although I can’t begin to get her to play as loud in my livingroom as she did on stage, I can try. To do less is to do her a great disservice.

The DCC is too damn smooth. It’s an understandable approach for DCC to take, since this recording is more hyped-up than any of Bonnie’s earlier work, but this album actually has loads of personality and nuance. Just because an album sounds polished and maybe a bit too “clean”, it’s foolish to think that it lacks intensity or ambition.

You listen to a track like “Thing Called Love” on the DCC, and it sounds good — the tambourine sounds like a tambourine, the bass sounds like a bass. The problem is you don’t hear the jingles of the tambourine hitting each other; the bass doesn’t smack you in the chest. When these elements are veiled, the life and, for lack of a better term, the point of the music go with them.

When I’m listening to Bonnie perform on a Hot Stamper pressing, I’m not merely hearing her singing the songs and nodding along with the beat, I’m being enveloped by her voice and transported to another place, as though she were in my living room, or I in her studio (something to do with Newton’s third law I believe). Although the DCC is very good, it doesn’t give us enough of what we’re looking for from an album like Nick of Time. It feels compromised, and you should never compromise the life of the music on an album that you love. (This is why I rail against panels and screens for speakers. Where is the life? The energy? The sound they produce bores me to tears.)

Both sides are POWERFULLY BIG AND BOLD, with meaty, deep bass (such a big part of the rockers here, Thing Called Love being a prime example) and the sweetest, richest, most ANALOG sound we’ve heard from any record Don Was has been involved with. When you hear it like this — something probably pretty close to what he heard during the control room playback for the final mix — it actually makes sense. It works. It’s not exactly “natural”, but natural is not what they were going for.

Something to Talk About
Good Man, Good Woman
I Can’t Make You Love Me
Tangled and Dark
Come to Me
No Business

Nick of Time not only was an artistic comeback for Bonnie Raitt; it brought her largest audience yet, so there was no reason to mess with success for its sequel, Luck of the Draw. And sequel is the appropriate word, since Luck of the Draw is nothing if it isn’t Nick of Time, Pt. 2. True, there’s a heavier reliance on original material this time around, but the sound and feel of the record is identical to its predecessor. There is one slight difference — several of the songs appear tailor-made for crossover success, whereas Nick of Time felt organic. Nevertheless, Luck of the Draw is an unqualified success, filled with strong songs — including the hits “Something to Talk About” and “I Can’t Make You Love Me,” plus the Delbert McClinton duet “Good Man, Good Woman” — appealing productions, and just enough dirt to make old-school fans feel at home.

One reason it took Raitt two decades to achieve the El Lay iconicity she deserves is her resistance to both folk gentility and studio antisepsis. So praise Don Was for humanizing the control-freak production values she could never get on top of in the ’70s. Another is her moral seriousness. So praise songwriters like John Hiatt, Bonnie Hayes, and maybe even Paul Brady for combining heft with hookcraft, and Shirley Eikhard, whoever she is, for “Something to Talk About,” the slyest distillation of this rowdy Quaker’s sexy ways since “Love Me Like a Man.”

But after that tell Raitt that no commercial reservation should ever torpedo a “Tangled and Dark,” about a deep, long wrangle with love itself, or an “All at Once,” about losing the teenage daughter she’s never literally had. It’s like the guitar she’s afraid she hasn’t properly mastered–she stops writing at the risk of her own intelligence, idiosyncrasy, and reality.