More of Our Favorite Orchestral Performances and Top Quality Sound 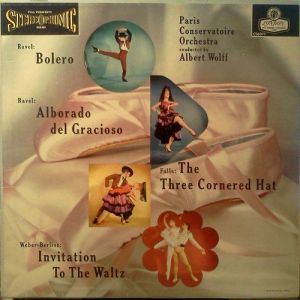 Side two here has a SUPERB sounding Bolero, and an EVEN BETTER Alborado del Gracioso, possibly the best we have ever heard. True A Triple Plus sound.

As you probably know, Bolero is very hard to find on vinyl properly performed with audiophile quality sound. The sound of Bolero here is excellent: very natural, not harsh at the end where the trombones comes in, and the not too compressed. (This is probably the biggest problem with most recordings of the work. Compression makes the quieter parts ravishingly open and clear, and positively ruins the climax with distorted compressor overload.)

Alborado… has some of the best sound we have heard on London. It’s spacious, dynamic and clear. With an extended top end the strings and horns sound harmonically correct. The orchestra from top to bottom is tonally correct as well.

The material on side one is not quite in the same league as that of side two, earning a grade of A+ for both works. The sound is a bit dry and lean, which means it is very detailed and clear but may not wear well unless your system is very rich and full in the lower mids and below.

My guess is that vintage tube equipment may be just right for this side. Either way, no matter what equipment you have, side two should be quite a thrill.

In 1918, almost 14 years after originally composing the work, Maurice Ravel made an orchestral version of Alborada del Gracioso (The Jester’s Morning Serenade), the fourth of the pieces that make up Miroirs (1904-1905). While the original piano version remains a recital favorite, the orchestral version has enjoyed even greater popularity as a concert-hall staple.

Ravel orchestrated a great many of his own piano works with great success—most famously, Le tombeau de Couperin, Valses nobles et sentimentales, Menuet antique, Ma mère l’oye, and Tzigane. In Alborada del gracioso, similarly, Ravel is in top form in translating his music from one medium to another. Most of the transcription is rather straightforward, with little in the way of actual recomposition, and the effective use of the percussion section is particularly striking.

The harp and pizzicato strings, which provide a spiky opening, are soon joined in more melodious fashion by members of the woodwind section. Energetic compound-meter rhythms and colorful glissandi in the woodwinds find splendid contrast in the stiller central section, which begins with a plaintive recitativo-like passage for solo bassoon. Ravel’s few changes to the original score are subtle; most often, certain passages are elongated for maximal exploitation of coloristic possibilities, as in the woodwind flourishes that wrap around the final glissando.