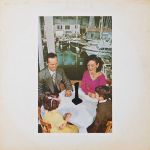 This was one of only three Classic Records 180 (later 200) gram titles that I used to recommend back in the day.

Now when I play the heavy vinyl pressing, I find the subtleties of both the music and the sound that I expect to hear have simply gone missing. These days the Classic just sounds second-rate compared to the real thing.

You can adjust the VTA of your rig until you’re blue in the face, you’ll never get the Classic to sound better than passable.

The average original pressing is better, and that means Classic’s version deserves a sub-standard grade of D.

We have a special section for especially bad sounding records that have been marketed to appeal to audiophiles, and you can find that section here.

It currently has 266 entries, but if someone wanted to audition more of them — that person is definitely not me, although I cannot imagine anyone more qualified — the number could easily hit 500, and probably many more than that.

If one were simply to include Japanese pressings, the kind many audiophiles regularly bought in the ’80s and ’90s for their quieter vinyl and supposedly higher quality mastering, our bad audiophile record section would contain multitudes. Multitudes I tell you!

To be fair, he has cut some wonderful records. We survey more of his work here.