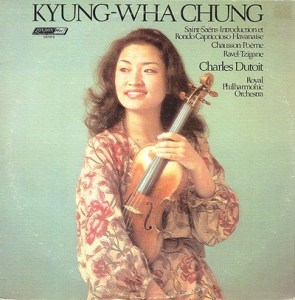 This 1979 London original English pressing of violin showpieces has Super Hot Stamper sound on side two, which came as a bit of a shock to us after playing side one, which is as congested and opaque as one would expect from such a late London recording. Side two is fabulous — full-bodied, rich and sweet. Even though it may have been recorded in 1977, the engineer is Kenneth Wilkinson, and the hall is Kingsway — not many bad recordings can be attributed to either.

But bad mastering or bad pressing quality are surely not the fault of either; when the record doesn’t come out of the oven right, the sound is going to suffer, and the sound on this side one is insufferable all right. But side two is GLORIOUS; it has wonderful music played with the greatest skill and feeling.

A++ Super Hot Stamper sound for both pieces. The Ravel is slightly darker in tonality but still works its magic beautifully. We rarely run across violin showpiece recordings of this caliber, especially these days. You could easily play fifty violin recordings and not hear one as good. This is music that belongs in any serious record collection.

These are not especially short works; both run more than nine minutes.

No grade. The violin is passable but the orchestra is so opaque and thick no enjoyment can be had from this side.

The composition is in one movement, with an approximate duration of ten minutes. Though the composer is sometimes regarded as following an Impressionist idiom, Tzigane clearly demonstrates Ravel’s ability to imitate the (late) Romantic style of violin showmanship promoted by such composer-virtuosi as Paganini and Sarasate.

Kyung-Wha Chung has been literally showered with recognition for her sparkling, energetic personality, and for her concentrated, inspiring, and nearly technically perfect performances; she is considered one of the top violinists in the world.