More of the Music of Thelonious Monk 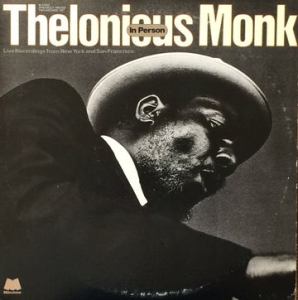 The Riverside pressings we’ve auditioned of both The Thelonious Monk Orchestra – At Town Hall and Thelonious Monk Quartet Plus Two – At The Blackhawk were just awful sounding. The OJC reissues from the ’80s, although better, were not overflowing with the rich, natural, relaxed sound we were looking for either.

Ah, but a few years back we happened to drop the needle on one of these good Milestone Two-Fers. Here was the sound we were looking for and had had so little luck in finding.

Which prompts the question that should be on the mind of every audiophile: What are the rules for collecting records with the best sound quality?

The answer, of course, is that there are no such rules and never will be. There is only trial and error. Our full-time staff has been running trials — we call them shootouts and needle drops — for more than twenty years now, with far more errors than successes. Such is the nature of records. It may be a tautology to note that the average record has mediocre sound, but it nevertheless pays to keep the inconvenient fact in mind.

Even worse, if you make the mistake of pinning your audiophile hopes on a current reissue — and you have reasonably high standards and two working ears — your disappointment is almost guaranteed.

This vintage Milestone pressing has the kind of Tubey Magical Midrange that modern records rarely even BEGIN to reproduce. Folks, that sound is gone and it sure isn’t showing signs of coming back. If you love hearing INTO a recording, actually being able to “see” the performers, and feeling as if you are sitting in the studio with the band, this is the record for you. It’s what vintage all analog recordings are known for — this sound.

What the best sides of In Person have to offer is not hard to hear:

If you have full-range speakers, some of the qualities you may recognize in the sound of the piano on this vintage pressing are WEIGHT and WARMTH. The piano is not hard, brittle or tinkly. Instead, the best copies show you a wonderfully full-bodied, warm, rich, smooth piano, one which sounds remarkably like the ones we’ve all heard countless times in piano bars and restaurants.

Rudy Van Gelder, eat your heart out. This is the piano sound Rudy never quite managed. Some say it’s the crappy workhorse piano he had set up in his studio. Others say it was just poorly miked. Rather than speculating on something we know little about (good pianos and their miking) let’s just say that Milestone had the piano, the room and the mics to do it right as you can easily hear on this very record.

What We’re Listening For on In Person

The first half of In Person contains the pianist/composer’s famous Town Hall concert of 1959 in which he performed his compositions as part of a ten-piece group also featuring trumpeter Donald Byrd, altoist Phil Woods, Charlie Rouse on tenor and baritonist Pepper Adams; Hall Overton’s arrangement of Monk’s recorded piano solo for the full band on “Little Rootie Tootie” is a highpoint.

The second half of this two-fer finds Monk leading a strong sextet with trumpeter Joe Gordon and tenors Rouse and Harold Land live at the Blackhawk in 1960 for four of his originals and “I’m Getting Sentimental over You.”