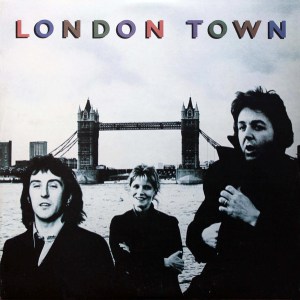 This vintage MPL import pressing has the kind of Tubey Magical Midrange that modern records can barely BEGIN to reproduce. Folks, that sound is gone and it sure isn’t showing signs of coming back. If you love hearing INTO a recording, actually being able to “see” the performers, and feeling as if you are sitting in the studio with the band, this is the record for you. It’s what vintage all analog recordings are known for — this sound.

What We Listen For on London Town

Reduced to the core trio of McCartney, McCartney, and Laine after the successful Speed of Sound tour, London Town finds Wings dropping the band façade slightly, turning in their most song-oriented effort since Band on the Run — which, not coincidentally, was recorded with this very trio. And although its high points don’t shine as brightly as those on its two immediate predecessors, it’s certainly stronger than Speed and, in its own way, as satisfying as Venus and Mars.

What London Town has in its favor is Wings’ (or, more likely, McCartney’s) decision to settle into slick soft rock, relying on glossy, synth-heavy productions as he ratchets up the melodic quotient. This gives the album a distinctly European flavor, a feeling that intensifies when the lyrics are taken into the equation, and this gives London Town a different flavor than almost any other record in his catalog. And if its best moments aren’t as strong as McCartney at his best they, along with the album tracks, find him skillfully crafting engagingly light, tuneful songs that charm with their offhanded craft, domesticity, and unapologetic sweetness. McCartney’s humor is in evidence here, too, with the terrific “Famous Groupies,” which means there’s a little of everything he does here, outside of flat-out rocking. It’s a laid-back, almost effortless collection of professional pop and, as such, it’s one of his strongest albums.