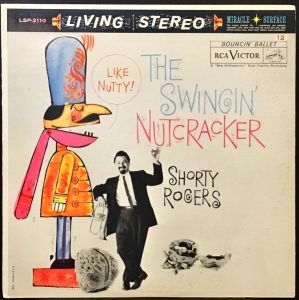 What do we love about these Living Stereo Hot Stamper pressings? The timbre of every instrument is Hi-Fi in the best sense of the word. The instruments here are reproduced with remarkable fidelity. Now that’s what we at Better Records mean by “Hi-Fi”, not the kind of Audiophile Phony BS Sound that too often passes for Hi-Fidelity these days. (For a taste of the ridiculously phony sound I’m talking about, click here.)

There’s no boosted top, there’s no bloated bottom, there’s no sucked-out midrange. There’s no added digital reverb (Patricia Barber, Diana Krall, et al.). The microphones are not fifty feet away from the musicians (Water Lily) nor are they inches away (Three Blind Mice). This is Hi-Fidelity for those who recognize The Real Thing when they hear it. I’m pretty sure our customers do, and whoever picks this one up is guaranteed to get a real kick out of it.

What We Listen For on The Swingin’ Nutcracker