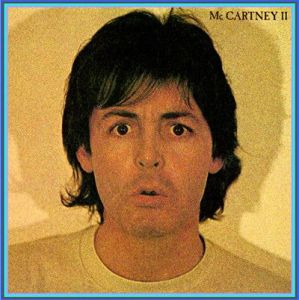 *NOTE: There is a small mark near the start of track five that plays lightly eight times.

If you’ve heard the album, you know it’s not exactly a straight-ahead pop record. Paul is in his one-man-band mode here, just as he was for his brilliant solo debut, but this time around he relies more on synth-heavy arrangements and plenty of studio experimentation. Assuming you have the right pressing, UK only in our experience, it can be a very good sounding record.

What We’re Listening For on McCartney II

Shootout Criteria (What To Listen For)

What are sonic qualities by which a Pop or Rock record — any Pop or Rock record — should be judged? Pretty much the ones we discuss in most of our Hot Stamper listings: energy, vocal presence, frequency extension (on both ends), transparency, spaciousness, harmonic textures (freedom from smear is key), rhythmic drive, tonal correctness, fullness, richness, three-dimensionality, and on and on down the list.

Coming Up
Temporary Secretary
On The Way
Waterfalls
Nobody Knows

Entitled McCartney II because its one-man band approach mirrors that of his first solo album, Paul McCartney’s first record since the breakup of Wings was greeted upon its release as a return to form, especially since its synth-heavy arrangements seemed to represent his acceptance of new wave. Occasionally, as in the effortless hooks of “Coming Up,” the record is quite enjoyable. McCartney II finds Paul in an adventurous state of mind, which is a relief after years of formulaic pop.