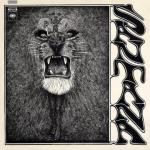 On badly mastered records, such as the run-of-the-mill domestic LP, or the audiophile pressings on MoFi and CBS, the music lacks the power of the real thing. I want to hear Santana ROCK. Most pressings don’t let me do that. Only the best do.

And the other thing the Hot Stampers have going for them is deep, solid bass, as mentioned above. There is a bass fundamental on this opening track that’s WAY down there. If you have small speakers you can just forget ever hearing this record sound right, because the bass is critical to Santana’s sound.

The key thing to listen to on this track is the quality of the vocals. On the best pressings they are very silky and sweet. It’s the kind of sound that modern recordings simply fail to capture. Or they’re not interested in that sound. Whatever the reason, they don’t have it.

BIG DRUMS, BIG HALL. You want to listen to this song on the biggest speakers you can find, playing as loud as they will play, in the biggest room in the house. You’ll never forget it.

This is probably my favorite track on side two. This song doesn’t even make sense at normal listening levels. If you can’t play it loud, don’t even bother. There are big guitar power chords on this song that are meant to be heard at loud levels. Gregg Rolie is practically screaming his vocals because he needs to shout to be heard over those crashing guitar chords. I like to say that when I come across a song like this, I can’t play it loud enough. The music cries out for more volume. The louder it gets the better it gets, because it’s all about power.

This song will sound somewhat muddy at normal listening levels. All the energy is in the lower frequencies. The voice is correct, however, so when the voice sounds tonally correct and there’s tons of energy in the bass and lower midrange, you probably have yourself a good copy.

The energy would be fantastic.

Then I would turn it up ANOTHER 3 DB or so. At this point I would say that “this is how loud it SHOULD be played”. All the effects I mentioned earlier become even more pronounced — wider, deeper, more clear, more powerful. The record was actually starting to sound like live music!

Steve Hoffman pointed out to me one day that the reason this record can be played loud is that, unlike most popular recordings, this album has a natural, unboosted top end, which means that the louder you play it, the more real it sounds. You can’t do that with most records. The top end is tweaked to sound good at lower volumes. Not so with the first album by Santana.

One of the reasons I [used to] have speakers with eight 15 inch woofers/ midrange drivers is that you need to be able to move a lot of air without distortion in order to play music at realistic listening levels. If you’ve got one or two 12 inch woofers and you try to play a record like this at loud listening levels, the distortion becomes unbearable as the drivers try to move all the air in your listening room and simply compress and distort in the attempt. As Bill Dudleston, the designer of the Whisper speaker, is famous for saying, it’s like trying to fan yourself on a hot day with a guitar pick. No matter how fast you wave the pick, it simply can’t move enough air to cool you off. The exact same principle applies to the reproduction of music at live listening levels. The drivers are not capable of the kind of motion that is required.

What this record has going for it is huge amounts of depth and a wide soundstage; an octave of bass below what would normally be considered bass (a 20 cycle note that sticks its head up from under the more common 40 cycle bass that drives the music); wonderful transparency and sweetness in the midrange; dynamics; and lastly, the kind of low-distortion, naturally un-hyped sound that this record shares with the Nirvana Nevermind LP that’s on the site.

When you turn up the volume on records like these, assuming you CAN turn up the volume to the levels we are talking about here, you will hear something that approaches the sound of live music. Not many records allow you to do that, but this one does, if your stamper is hot enough.