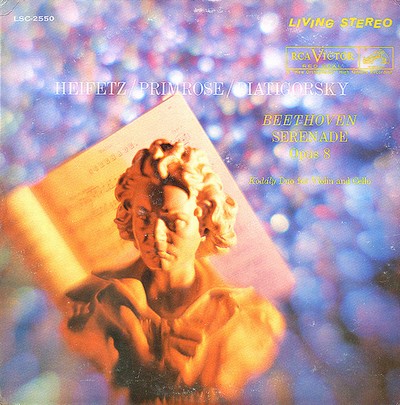 The sound is RICH and TRANSPARENT, and unlike a lot of RCA’s chamber recordings and this very side one, not dry. The tonality is Right On The Money. The performers are present and the transients of their instruments are not in the least bit smeared, vintage tubes or no vintage tubes in the recording chain.

RCA is justly famous for its chamber recordings, which tend to be somewhat rare for some reason. Let’s be honest: we did not conduct this shootout with a dozen copies of the album. (It would take us at least twenty-five years to find that many clean pressings.)

What we had were quite a few other Heifetz RCA chamber recordings, as well as some favorites by the Quartetto Italiano and I Musici that we are very fond of and know well.

After thirty two years in business selling vintage vinyl, by now we’ve played scores if not hundreds of good violin recordings. We have no problem recognizing good violin sound (as well as correct violin tone, not exactly the same thing) when we hear it. In the past our top Hot Stamper classical pressings would go directly to our best customers, customers who want classical recordings that actually sound good. not just the kind of Golden Age Recordings that are supposed to. Now that we are able to do classical shootouts on a regular basis, we hope to have enough superb sounding classical recordings for all of our audiophile customers.

I’ve commented often over the years of the benefits to be gained from listening to classical music regularly. Once a week is a good rule of thumb I would say. I love rock and roll, jazz and all the rest of it, but there is something about classical music that restores a certain balance in your musical life that can’t be accomplished by other means. It grounds your listening experience to something perhaps less immediately gratifying but deeper and more enriching over time. Once habituated, the effect on one’s mood is not hard to recognize.

Of course it should be pointed out that the average classical record is a sonic disaster. There are many excellent pressings of rock and jazz, but when it comes to classical music, being so much more difficult to record (and reproduce!), the choices are substantially more narrow. Most of what passed for good classical sound when I was coming up in audio — the DGs, EMIs, Sheffields and other audiophile pressings — are hard to listen to on the modern equipment of today.

I would say we audition at least five records for every one we think might pass muster in a future shootout, and we’re pulling only from the labels we know to be good. I wouldn’t even take the time to play the average Angel, Columbia or DG, or EMI for that matter. The losers vastly outweigh the winners, and there are only so many hours in a day. Who has the time?

All that said, it should be clear that assembling a top quality classical collection requires much more in the way of resources — money and time — than it would for any other genre of music. We are happy to do the work for you — our best classical pressings are amazing in every way — potentially saving you a lifetime of work… at a price of course.