Our last big shootout was back in early 2008. Since we never tire of discussing the Revolutionary Changes in Audio that have occurred over the last quite eventful year (really more like five quite eventul years) , we here provide you with yet another link to that commentary. Suffice to say, this record, like most good records, got a whole lot better.

(Some records do not, but that’s another story for another day.) We noted some new qualities to the sound that we would like to discuss; they’re what separated the men from the boys this time around. Note that we have left the exhaustive Track by Track Commentary from the last shootout in the listing. It took a long time to write it, and the vast majority of it is still true. We might quibble with some of it, but for the most part we think you will get a lot of out it, so there it will stay.

As I’ve noted before, this record is a milestone in the history of popular music. Not only is it The Most Successful Fusion of Rock and Jazz Ever. It’s also One of the Finest Recordings of Popular Music Ever. The sound is nothing short of amazing. Just the drums alone are enough to win awards: the kick drum has real kick, the snare is, in my opinion, the best rock snare ever recorded, the cymbals shimmer like real cymbals; almost everything is right with this record. Especially the music.

What We Learned This Time Around

All the best qualities of the best copies stayed the same; this is to be expected. If records you know well over a long period of time suddenly start to sound different, you can be pretty sure that you’ve made an audiophile error in your system somewhere. You need to find it and figure out how to fix it as fast as possible, although as a rule this process can turn out to be very time consuming and difficult. The first place I would look is to any changes in wire, whether speaker, interconnect or power cord. It has been my experience that this is where most of the bad sound in audiophile systems comes from. Much commentary to that effect can be found in The Better Blog.

It’s All About the Brass

What we learned this time around for this album can be summed up in a few short words, and already has been above: it’s all about the brass. Man, when the brass is right on this record, everything just seems to come together, top to bottom, floor to ceiling, wall to wall, the sound is almost always JUST RIGHT.

Let me give you just one example of how big a role the brass plays in our understanding of this recording. The best copies present a huge wall of sound that seems to extend beyond the outside edges of the speakers, as well as above them, by quite a significant amount. If you closed your eyes and drew a rectangle in the air marking the boundary of the soundscape, it would easily be 20 or 25% larger than the boundary of sound for the typically good sounding original pressing, the kind that might earn an A or A Plus rating.

The effect of this size differential is ENORMOUS. The power of the music ramps up beyond all understanding — how could this recording possibly be this good? You may need 50 copies to find one like this, which begs the question: why don’t the other 49 sound like this one? The sound of the amazing LP has to be on the master tape in some sense. Mastering no doubt contributes to the sound, but can it really be a factor of this magnitude? Our intuitions say no. More likely it’s the mastering of the other copies that is one of the factors holding them back, along with worn stampers, bad vinyl, bad needles and all the rest. (Any reason you like for why a record doesn’t sound good is as valid as any other, so you might as well pick one you are comfortable with; they’re all entirely meaningless. Of course the reverse of this is just as true: why a record sounds good is anyone’s guess, and a guess is all it is.)

After doing Hot Stamper shootouts for nigh on twenty years, it’s practically axiomatic with us here at Better Records that we will stumble on these “outlier” copies from time to time. Being so far outside the norm, they prove our case better than any amount of commentary can. When the legendary Michael Fremer talks about his four orignal copies of record X, Y or Z (which he does now on a regular basis, have you noticed? He used to have just one; now he makes sure to have four or five. Wonder why that is?) and proceeds to make a case for some Heavy Vinyl Remastering as The Way, The Truth and The Light, Finally, Thank God for Bernie Grundman-Steve Hoffman-Kevin Gray-et-al, we naturally find ourselves wondering Is Four Enough?

In most cases, if you know your records well, clean them right, have a reasonably good stereo and two fairly well-trained ears, you should be able to beat practically any Heavy Vinyl or Audiophile Remastering with four well-chosen copies.At least one of them should be clearly better. (We naturally have our doubts about Fremer’s qualifications in any of those areas: cleaning, stereo, ears, etc. Let’s face it: you can’t be that wrong that often and know what the hell you are talking about.)

Do You Need Fifty?

The short answer this time around is Yes, you need fifty. We had one Four Plus Side One and one Four Plus side two, on two different copies obviously, and I would say we had pretty close to fifty copies in our data pool if you count the first round needle-drop rejects, of which there were probably thirty or more I would guess, with more than fifteen making the cut for the final rounds. Forty to fifty, how’s that?

You have four you say? Step it up an order of magnitude and you might start whistling a different tune. But probably you won’t. When so much of your reputation, not to mention your livliihood, is based on opinion, the last thing you can afford is to be seen to be wrong.

We obviously take a different tack here at Better Records; we’re wrong from time to time and proud of it. It means we learned something. Who wants to be stuck defending the indefensible? It works like this: From time to time we admit we were wrong. In the process of doing our work we learned a thing or two, which we are happy to talk about, since we naturally enjoy sharing with you the process that brought us a better understanding of the issues involved. If we’re always right how can any of that happen?

Which Do You Prefer: the Recipe, Or Delicious Pudding?

And more to the point, fortunately for us we have more than just opinions; we have records. Our records are really all we need to make our case; in fact they make it for us. Our opinions, right or wrong, are entirely superfluous. Anything other than the sound in the grooves is of little to no consequence. That sound, in those grooves, cannot be denied; no amount of commentary, for or against, will change it in any way.

We’re not selling recipes; we’re selling pudding, and this is some mighty fine tasting pudding if we don’t say so ourselves.

What’s Tasty About This Copy

Side one is one of the outliers we discuss above. The sound is OFF THE CHARTS. A++++! We have an expression that we like to use for this kind of pressing — FREAKISHLY GOOD! Another one we like is Master Tape Sound. When you drop the needle on a record this good, you feel like you just threaded up the master tape and hit play. The effect is that you’re so totally IMMERSED in the musical experience that you forget you’re listening to a record. You’re hearing the music exactly the way the musicians intended it to sound. You can’t ask for more than that.

Side two is killer as well, but after hearing side one, even at A++ to A+++, it’s still a step down in sound quality. It has the big bold sound we love about this recording, but is missing something right in the middle of the midrange. The brass has a subtle blariness that’s not evident on side one. In practically every other way it is doing everything right, with tons of energy, full extension on both ends, transparency and depth to beat nine out of ten copies.

It’s exceptionally hard to find great sounding copies of this record on quiet vinyl. The first track on side one and the last track on side two will almost always have surface noise behind the quiet music. Old Columbia vinyl tends to be pretty noisy, so finding copies quieter than Mint Minus Minus is a feat, to say the least. This copy, however, is UNUSUALLY quiet — Mint Minus or very close to it on BOTH sides. 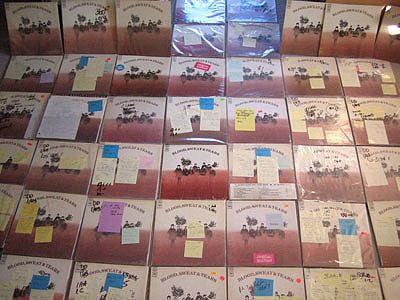